4 Quotes About the Blessed Virgin Mary for May 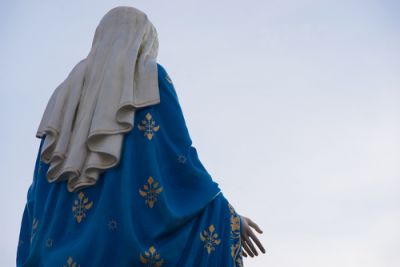 In the Catholic tradition, May is dedicated to the Blessed Virgin Mary. It’s kind of ironic that the same month in which Americans celebrate Mother’s Day, Catholics remember the most iconic mother of all. Here are some interesting quotes in honor of Mary.

Honored by a Man Who Was Excommunicated

Martin Luther, the man who sparked the Protestant Reformation, was so critical of the Catholic Church that they excommunicated him. However, he still regarded Mary in the highest fashion. He said:

[Mary is the] highest woman and the noblest gem in Christianity after Christ. . . . She is nobility, wisdom, and holiness personified. We can never honor her enough. Still honor and praise must be given to her in such a way as to injure neither Christ nor the Scriptures.

Remembered by the Patron Saint of Priests

St. John Vianney was a French parish priest who served in the 19th century. He made his first communion in secret, because he was born at the end of the French Revolution. Catholicism was prohibited in the country until 1802. Vianney wanted to serve as a contemplative monk, but he was a priest in the village of Ars. Toward the end of his life, he was so well-known that he had over 20,000 pilgrims visit him each year. He would spend 11 or more hours a day in the confessional during winter. In summer, the time would increase to 16 or more hours. His quote about Mary:

Jesus on the Cross said to the disciple whom He loved: “Behold your Mother!” How sweet are those words to the Christian who is able to understand what depths of love they contain!

Prayed To by a True Servant

Mother Teresa, founder of the Missionaries of Charity, was recognized for her charitable work in India and throughout the world. It should be no surprise that she prayed to the Virgin Mary, as it is part of her Catholic heritage:

Mary, give me your Heart: so beautiful, so pure, so immaculate; your Heart so full of love and humility that I may be able to receive Jesus in the Bread of Life and love Him as you love Him and serve Him in the distressing guise of the poor.

Remembered by One Who Was Healed

When Josemaria Escriva was two years old, his mother took him to Torreciudad to pray to a venerated statue of the Blessed Mary. Doctors expected him to die, but he lived. Escriva went on to initiate the Opus Dei, known as “the Work.” As a priest, Escriva ended his sermons with a prayer to Mary. Every room in all the offices of the Opus Dei were outfitted with a picture of the Virgin. He believed:

So your strength is failing you? Why don't you tell your mother about it? . . . Mother! Call her with a loud voice. She is listening to you; she sees you in danger, perhaps, and she—your holy mother Mary—offers you, along with the grace of her son, the refuge of her arms, the tenderness of her embrace . . . and you will find yourself with added strength for the new battle.

Why Pray to Mary?

Most people who weren’t raised in the Catholic Church question why Catholics pray to Mary and other saints. While it’s individual for each person, the general thought is that the saints have a better connection to Christ. Just because someone isn’t living on earth, doesn’t mean they aren’t living. Asking Mary or another saint to intervene for you is like asking a friend on earth to pray for you. Because Mary is the Mother of Jesus, who better to intercede on your behalf?

You don’t have to pray to Mary to remember her life and place in the Bible story. Much has been done in her name, which is why it’s important to understand how she fits into religion.