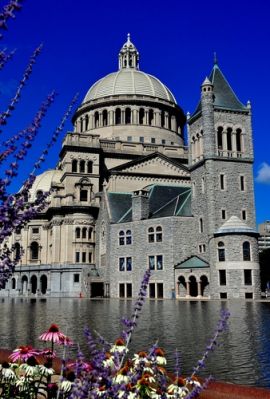 In June, J.D. Greear was elected as president of the Southern Baptist Convention. At just 45 years old, he’s the youngest president of the SBC in the past 37 years. He’s also the first Gen Xer to take the helm of the 173-year-old denomination. The position is largely symbolic. The term is just one year, but Greear can be reelected for another year. It’s hoped that Greear will build bridges between generations in the SBC. It might be years before his legacy is truly known, but it’s possible that historians will look back on his election and say that it changed the course of the SBC.

Let’s take a look back at some other Americans who were influential to the course of religion in the United States.

Not much is known of Townsend before his work as a Bible salesman as an adult. He was born at the end of the 19th century in Southern California. Townsend founded Wycliffe Bible Translators. His heart wasn’t in linguistics, as much as it was in mission work. He laid the foundation for translating the Bible into many indigenous languages. Camp Wycliffe was the small beginning of his work. The first summer it opened, in 1934, only two students enrolled. Today, it is a worldwide ministry. Townsend believed that translators needed a deeper understanding of the culture to really translate the Scriptures well.

Eddy was born during a time when women got married, had children and took care of the home, but she would establish the Christian Science denomination. Eddy incorporated the church in 1879 when she was 58. The remainder of her life, about 41 years, was dedicated to the church. As part of her efforts to grow the denomination, she founded a daily newspaper and monthly magazine for the church’s members. The Christian Science Monitor has won seven Pulitzers. Today, you can visit the Mary Baker Eddy Library in Boston, MA. It’s one of the world’s largest collections by an American woman. She wasn’t without controversy, but the church she founded has withstood the test of time.

Day was one of the founders of the Catholic Worker Movement, which provided aid for the poor and homeless during the height of the depression. She lived a bohemian lifestyle during the roaring twenties and during the ’60s was told that she was the original hippie. Day had an abortion when she was just out of college. She believed that she would be unable to have more children, but when she got pregnant in 1925, she was elated. It was this period of time that brought her to Catholicism. Today, she is being considered for sainthood in the Catholic Church.

Elijah led the Nation of Islam from 1934 until he died in 1975. He was born Elijah Robert Poole to a family in Georgia. His father was a Baptist lay preacher. Elijah quit school after third grade to work to support the family. He grew up in a violent time, reportedly witnessing three black men lynched before he was 20 years old. His family moved to Detroit where Elijah became a follower of Wallace Ford Muhammad. Wallace turned over leadership of the Detroit group of Muslims to Elijah. Elijah founded more temples around the country and led the Nation of Islam, even though he served four years in prison for sedition. Elijah instructed his followers not to register for the draft and not to serve in the armed forces. The name has changed over the years, but the organization has always been a strong advocate for African Americans. It’s not without its critics and controversy, but Elijah was a strong leader who took a small group in Detroit and transformed it into a movement.