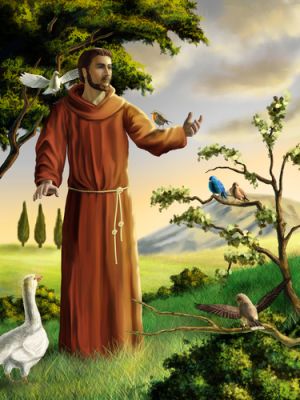 The Catholic Church celebrates many saints each month. You don’t have to be Catholic to be inspired by their stories. Here are five saints whose feast days are in October.

Saint Francis is often called the world’s most popular saint. He’s often thought of as a charming hippie who talked to the animals. He is the patron saint of animals, Italy and stowaways. One legend says that he persuaded a wolf to stop attacking the local village in exchange for being fed by the villagers. Saint Francis exuded poverty as a lifestyle. He isn’t just honored in the Catholic Church but in many other religions as well. Many Episcopal churches in the United States hold services in which parishioners can bring their pets in for a blessing on the Sunday closest to his feast day of October 4. Francis had a love of everything nature and lived his life accordingly. He is a great man to study.

Teresa was born in 1515 to a noble Spanish family with Jewish roots. Her Jewish grandfather was forced to convert to Christianity or face emigration. Teresa’s father was a wool merchant, and during the Spanish Inquisition, he was accused of returning to the Jewish faith but assumed a Catholic identity. Teresa and her brother were raised in the Catholic church, but she wasn’t prepared to be a nun. Her father was disappointed when she decided to join a convent. She founded the order Discalced Carmelites. She is a patron saint of persons who suffer from headaches.

Rheumatic fever confined Margaret, born in 1647, to bed for four years as a child. Without many activities to keep her occupied while she was ill, she prayed and reflected on her faith. She made a promise that if she regained her health, she would become a nun. Much to her family’s chagrin, she entered the convent at the age of 24. Margaret was a mystic who experienced visions of Christ. She is the patron saint of polio sufferers and those who have lost their parents.

Luke is considered to be the author of the Gospel of Luke and Acts of the Apostles, but he never met Jesus. Most historians believe that Luke was a Greek physician, although there are indications he might have been Jewish. The books of Luke and Acts make up 27.5% of the New Testament, making Luke the single largest contributor to the text. He is a patron saint of physicians, artists, butchers and surgeons. Most Christian faiths regard him as a saint, believing that he was martyred for the faith. It is also thought that he was the first icon painter.

This Columbian nun was canonized just a few years ago in 2013 by Pope Francis. She was born in South America in 1874. Her father died in the Columbian Civil War, leaving her without anyone to provide for the family. As a child, she spent a lot of time reading the Bible and praying because she was quite lonely. Laura worked as a missionary among the indigenous people in Columbia and founded the Congregation of Missionary Sisters of Immaculate Mary and Saint Catherine of Siena. She felt called to work with the poor and native people who were discriminated against. Her respect for their culture is one of the reasons she is highly regarded in her country and among Catholic saints. She is the patron saint of people who suffer from racial discrimination and is Colombia’s first saint. Her legacy lives on through the sisters in her order, who now work in 21 countries throughout the world.

These saints each did something admirable. Be inspired by their actions to go and live your best life.