Do Political Campaigns Belong in the Church? 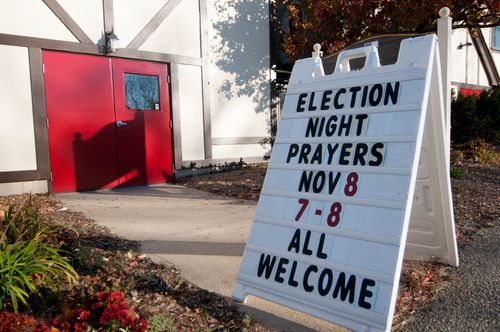 During an election year, you may hear a lot of overlap between religious leaders and politicians. People of varying beliefs claim that certain people running for office offer more to those who believe in God. They may even claim that their opponents are opposed to the church's values and, thus, the supposed will of God. Should you believe these statements? Whom do you believe when those within your religion disagree about which candidate to endorse? Should your pastor, elders or other church leaders add their two cents to the conversation? These are all important questions to consider when deciding who will get your vote.

Love is a central theme in most major religions. Thich Nhat Hanh describes love as understanding the suffering of others. Catholics adhere to the biblical standard of loving God first and loving others just as they love themselves. Unitarians view love as the force that spurs them to action, caring for their communities and the world beyond them. No matter what your particular belief system, your faith probably advocates more for the greater good rather than the concerns of the individual. In this way, leaders of most faiths would likely encourage followers to vote in a way that works in the best interest of the greatest number of people. Difficulty arises, of course, when they disagree about the specific things that are best for humanity.

A Conflict of Values

On the surface, it may seem easy to simply list your values and find candidates whose platforms align with them. You may even assume that everyone who shares those values will inevitably reach the same conclusion when it comes to the choices they make in the voting booth. The problem with this is that most values are pretty abstract. Two people may fervently believe that sanctity of life is important, but the same value may lead one to vote for the candidate who opposes abortion and the other to vote for the candidate who advocates for equal access to healthcare. Some who value justice may seek to increase funding for law enforcement, while others focus on prison reform or fair wages. Individual perspectives can lead to vast disagreements on how future government leaders should pursue their shared values.

A campaign is the chance for politicians to talk to as many citizens as possible to ask for their vote. To this end, many church leaders invite those running for office to speak or participate in events. Depending on how these are handled, this decision can have different outcomes. If the forum is structured so that the candidate spends most of his or her time listening to the concerns of the congregation and answering their questions, this can be a productive way to get people civically involved in an environment in which they are comfortable. If, however, the event involves mostly grandstanding and publicity stunts, it can backfire, not only for the politicians but for the church leaders who allowed it to happen.

According to the Pew Research Center, while most people agree that church leaders should not explicitly endorse political candidates, churchgoers are generally comfortable with the amount of political talk that comes out of the pulpit. Many also report that they don't know their clergy's political leanings, indicating that many leaders make an effort to stick to their religious texts and keep their own political opinions out of it when they address their congregations. This seems like a smart choice, considering how polarizing political discussions can be. When the goal is to show love to as many people as possible, it makes sense to avoid behavior that may alienate them.

The line between politics and religion is a tricky one, and overstepping it can have unpleasant consequences. Focusing on love, even toward those with whom you disagree politically, is the key to navigating these conversations with grace.

I will be as the dew even thousands under his shadow are twenty thousand, of angels:

Keep your house in order. We who have been drawn into the Political Arena left or right have all been deceived. Either pacified by rejection or allowed radicalization both have met the goal of the oppressors, division of God's people. The Right is expected to observe the Law, the left to break it. Both claiming indignation. While the politicians do nothing to calm the spirit. On the contrary. They throw meat to the wolves. Main Stream Media in it's entirety through news, entertainment, Tech, educational programming and advertising is all designed to mold you into their design away from God. Man will not save you. He will only enslave you as has been for time and memorial. Yes brothers and sisters we have masterfully been mesmerized. Think and pray hard on this, you will come to the same conclusion. Remember how He will come, like a thief in the night, your house is your soul. Better to be prepared for nothing than to be found wanting. In our time or not, God's Kingdom awaits. Are you prepared? Is He first and foremost in your thoughts? In your life?

Azrael 30:1 I will be as the dew even thousands under his shadow are twenty thousand, of angels:

Here are my thoughts about politics and the pulpit. Years ago when I was ordained in a different fellowship that the ethical thing to do was to leave the politics at the door. I still hold that view. Reason, the minute you bring politics into the Holy Desk you, like this article has already stated, you alienate at least fifty percent of your parishioners. Here in Canada that could mean that you may alienate at least two thirds. Our parliament at the least has three political parties represented. I truly appreciate this article as I am about to start a new series in the New Year on my WordPress blog.