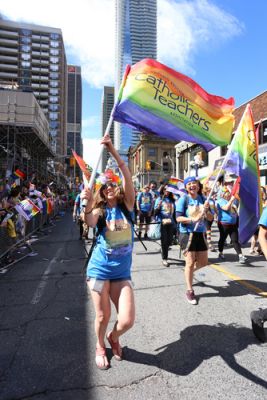 In the latest chapter of the growing debate over the employment of LGBTQ staff in local Catholic educational institutions, the Archdiocese of Indianapolis, Indiana, kicked the Brebeuf Jesuit Preparatory School out of the archdiocese last week after the school refused to fire a gay teacher married to a same-sex partner. The archdiocese threatened similar action against Cathedral High School, and the school announced over the weekend that it fired its gay teacher in order to remain part of the archdiocese.

One advocacy group that tracks employment disputes between the Catholic Church and LGBTQ individuals says that it knows of 80 such instances that have occurred over the past decade. Some affected people lost their jobs. Others had their employment offers rescinded. Still others were heterosexual individuals who merely supported or advocated for LGBTQ rights.

The Archdiocese of Indianapolis is known to be more aggressive when dealing with LGBTQ “violations” of church doctrine. In 2017, it forced Roncalli High School to fire a lesbian guidance counselor in a same-sex marriage. The problem, however, is nationwide. For instance, a Louisville school counselor says she was forced out of her job at a Catholic high school when she married her same-sex partner.

In a recent statement, Archbishop Charles Thompson said that the archdiocese recognizes all Catholic school teachers, guidance counselors, and administrators as ministers. Consequently, these employees have a responsibility to “convey and be supportive of all teachings of the Catholic Church.”

Since the church shuns same-sex marriage, it is such a marriage that incurs the wrath of the archdiocese. Archbishop Thompson went on to say that, “Regrettably, Brebeuf Jesuit Preparatory School has freely chosen not to enter into such agreements that protect the important ministry of communicating the fullness of Catholic teaching to students...Therefore [it] will no longer be recognized as a Catholic institution by the Archdiocese of Indianapolis.”

Critics point out that there undoubtedly are many additional Indianapolis Catholic school employees who “violate” other church prohibitions, such as those using birth control, having premarital sex, and getting remarried after a divorce without first going through the annulment process.

Cathedral High School is affiliated with the Brothers of Holy Cross, an organization of Catholic priests and brothers whose main ministry is education. The Brotherhood, however, does not sponsor or financially support Cathedral or any other high school. Consequently, had the archdiocese kicked Cathedral out, the consequences for the 101-year-old school would have included the loss of the following:

Brebeuf Jesuit Preparatory School is in a completely different position. It operates under the auspices of the Society of Jesus, i.e., the Jesuits, which sponsor and govern it. Consequently, it enjoys a considerably higher degree of independence from the Catholic Church hierarchy than Cathedral. Being kicked out of the archdiocese will in no way affect Brebeuf’s nonprofit standing.

In its own statement, Cathedral described the difference between the two schools thus: “Because Brebeuf is a specific ministry of the Jesuits, their canonical and nonprofit status is different than ours. Therefore, the two schools cannot function the same way if Cathedral were to receive a similar decree as Brebeuf.”

Despite the lesser impact of being kicked out of the archdiocese, however, Brebeuf indicated its intention to appeal the archdiocese’s decision all the way to the Vatican. Interestingly, Pope Francis is himself a Jesuit.

It is unclear whether or not Brebeuf will regain its standing from the Archdiocese of Indianapolis. However, the LGBTQ controversy within the Catholic church likely will continue for decades to come.