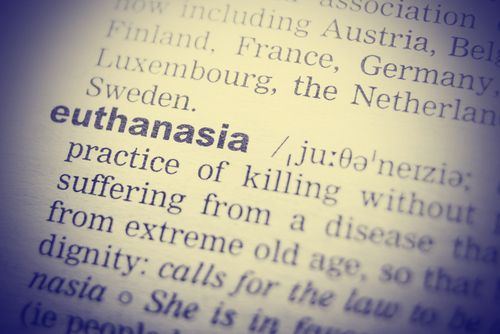 One of the central themes of almost all religions is death or, more specifically, what becomes of us when we die. The teachings of almost every faith focus on attempting to explain death and dying and how it fits in within the human experience. Religion provides guidance for how individuals should grieve and commemorate those who have died. It strives to provide understanding and comfort for those who face death and, more importantly, hopes to use death as a vital concept for helping individuals find meaning in their lives. That being said, it is no surprise that all have faiths have strong opinions on euthanasia.

Most religions disapprove of euthanasia, while many, such as Catholicism, outright forbid it. Some reasons for the general disapproval of euthanasia include “God has forbidden it,” “all lives are sacred,” “the principle of ahimsa (no harm)” and “human life is special.” Most religions take the stance that if someone is vulnerable because of disability or illness, he or she deserves superior care and protection, and that euthanasia should not be an alternative to proper end of life care.

The teachings of Buddha do not specifically deal with euthanasia. Though most Buddhists are against involuntary euthanasia (as is most of society), it is unclear how they feel about voluntary quietus. However, Buddhist philosophy may yield a bit of insight.

Many of the Buddhist teachings emphasize the importance of living a peaceful and harm-free existence. Part of these teachings explicitly state that followers should not end life. The reference refers to any life, not just human life. The intentional ending of one’s life, even if done to end agony and suffering, seems to go against Buddhist beliefs.

Parts of Buddhist monastic law explicitly forbid mercy killing. However, the general population is not bound by a code of Buddhist law. If a practicing Buddhist does elect for physician-assisted death, the most that devout Buddhists can say is that he or she made a grave error in judgment.

Buddhism is all about achieving a calmer and better state of mind. When a person is considering euthanasia, it is clear that he or she is not in a good state of mind, and that his or her physical suffering has been allowed to continue for so long that it has caused mental suffering. This all goes against what Buddhists believe.

Practicing Buddhists may insist that the use of painkillers is preferable over euthanasia, as pain medications allow suffers to attain a mental state in which they longer live with mental anguish. They may also argue that euthanasia may put the physician who assisted with the process into a bad mental state. Buddhists make it a point of ensuring they do not cause harm — physically or mentally — to others.

Buddhists also believe in karma. Karma is the theory that when a person is reborn, his or her new life is the result of the karma accrued in the past life. The taking of a life, even if it’s one’s own, interferes with the karmic balance and may prevent karma from working itself out before it’s time.

For many, regardless of what you call it or how you look at it, euthanasia is suicide. According to the text, Buddha forgave only two instances of suicide, both of which involved monks who had achieved the highest level of enlightenment. When the monks of lore died, their minds were free of anger, fear or hate. They were full of selflessness. Such a state of being is essential to ensuring that the new life will begin on the right foot. What these stories suggest is that suicide is only acceptable for the enlightened ones.

It's unclear exactly what Buddhism’s position is on euthanasia. However, a review of the religion’s philosophy can provide some insight.

People who practice Buddhism believe that Right Action is any action that is not in violation with one's own understanding and practice of the Precepts. In the Diamond Sutra, the Buddha clearly states that the Teaching he has shared is no teaching. That is, the Teaching is not his alone. It is not a static doctrine. It must be put into practice and adapted in a way that is relevant to our own lives. We should think of the Buddha's Teaching as more like a suggestion, or friendly advice. Westerners often conflate keeping the Precepts with the Thou-Shaltness of the 10 Commandments. Certainly monastics have strict rules that govern their behavior, and violation of certain cardinal Precepts is of grave concern because it can harm the credibility of an entire organization that depends upon community support. In general, however, all who practice Buddhism endeavor to keep the Precepts as best we can. We do our best at all times to be mindful of how we live our lives, recognizing that keeping one Precept may require breaking another. When we fail to keep a Precept due to unwholesome nutriments, our mindfulness practice requires us to confess and embrace this failure so that we may sit with it, transforming it into nourishment for our practice. The only "sin" in the practice of Buddhism is not acknowledging ones own mindlessness. Therefore, I would suggest that Euthanasia is not a violation of the Precepts if by so doing one has looked deeply and realized through this insight that such action would transform ill-being (Duhkha) into well-being (Sukha) for themselves and for others.