An Overview of the Traditional Jewish Wedding Ceremony 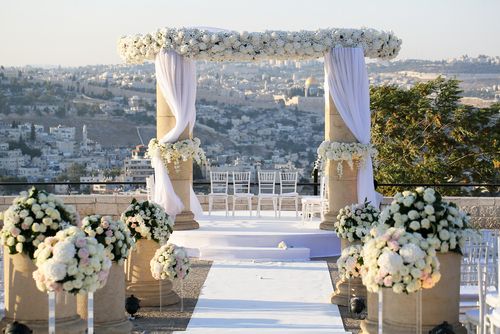 A wedding is an important step for a couple. This is the point when two people in love decide to commit on a deeper and more meaningful level. Though you may have some idea of what this type of ritual looks like in your own culture, you might not be sure how others go through this process. Review these points surrounding the Jewish wedding ceremony script and gain more perspective.

You most likely already have a general idea of what a Christian or secular wedding looks like. The beginning of the ceremony, for example, typically starts with the procession. This is when the couple and the wedding party enter the venue and process to the front of the crowd. This is a part of the ceremony that is usually underscored with music of the couple’s choice. While Christian weddings have the group process to an altar, the Jewish tradition is slightly different.

In a Jewish ceremony, the couple and party make a procession toward a chuppah. This is a canopy that the couple stands beneath with the officiant while the ceremony takes place. Another difference between Jewish and Christian weddings is that at the end of the processional, a Jewish bride will often circle the groom seven times before moving to the next step of the wedding. This is an old tradition meant to bring good luck.

One of the more important aspects of the wedding is the Jewish wedding ceremony text. Though weddings might look different from one culture to the next, the main idea is for two people to come together before family and friends to declare intention and commitment to marry. Reviewing examples of scripts for Jewish weddings can provide you invaluable insight into what to expect. Whether you’re performing this type of ceremony for a friend as an officiant or you’re tying the knot yourself, knowing the script can make a world of difference.

As with any religious ceremony, the script will vary depending on how devout the couple is. The more traditional event follows a script that includes older rituals and a Ketubah signing, which is a pre-marriage wedding contract that is agreed to in certain stricter Jewish circles. However, nontraditional wedding ceremonies for those practicing the Jewish faith in some capacity are also popular, and many people replace the signing with a simple sand ceremony instead.

Most people who are not a part of the Jewish faith are familiar with the concept of the “breaking of the glass” because of how it has been portrayed in film and television over the years. Instead of ending the ceremony with a kiss, the couple brings the event to a close with a smash. A piece of thin glass is taken and placed on the ground and wrapped in a cloth for safety. The couple then smashes the glass as a way of signifying to the crowd that the ceremony is officially over and the couple is now wed.

Though breaking the glass is the traditional final act of the ceremony, some couples like to extend the event in a few minor ways. Many events will end with the Siman Tov u’Mazel Tov, which is a song that is traditionally performed after the glass is broken during a wedding. Modern couples also tend to add a kiss into the mix at this point, as many people are accustomed to a wedding ceremony ending with a physical display of affection.

Knowing the ins and outs of a Jewish wedding script can help you know what to expect on your own big day. Review the basics and do some additional research to discover everything you need to understand.