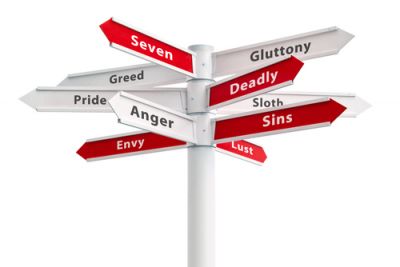 In contrast to the seven virtues are the seven cardinal sins. Under Christian philosophy, the seven deadly sins are vices that lead to other immoralities. Generally, the concept of these sins is thought to come from the Catholic Church, but because this concept has penetrated the culture at large, it’s important to have an understanding of them.

The list of seven deadly sins never really appears in the Bible. Galatians 5 refers to serious sins, such as fits of anger, drunkenness, and sexual immorality. Proverbs 6 refers to “six things the Lord hates,” including murder, false witness, people who stir up conflict and liars.

The list of seven deadly sins probably came from Evagrius the Solitary, a fourth century theologian and monk. He classified eight patterns of evil thought, and did not create the list but simply refined theories from Aristotle and Horace. In AD 590, Pope Gregory I used Evagrius’ list to create the classic list we know today.

Over the next few weeks, we’ll be taking an in-depth look at these seven sins:

The Seven Deadly Sins in Culture

One example is from “Charlie and the Chocolate Factory.” Augustus Gloop represents gluttony and Veruca Salt is a good example of greed and envy. Mike Teavee portrays wrath and sloth, while Violet Beauregard exemplifies pride. Knowing this adds a new dimension of understanding to the book. It’s a delightful story with a deeper meaning.

Delving into the seven sins should be an interesting look at how morals formed over the centuries. It’s not about condemnation, but about understanding how people think about sin and immorality.