Who Was Miriam in the Bible? 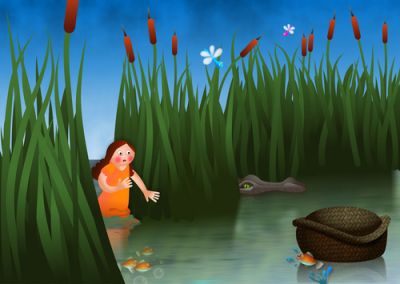 Moses and his brother, Aaron, are the heroes of the book of Exodus in the Bible. It was Moses who demanded the release of the Israelites from the Pharaoh of Egypt. Aaron was Moses’ spokesperson, because Moses could not speak eloquently. Moses led the people out of Egypt, with Aaron at his side. What’s often forgotten is that their sister, Miriam, was with them. The Talmud considers Miriam one of the seven major female prophets of the Old Testament. Learn more about her role and place in Jewish tradition.

Miriam Watched Over Moses as a Baby

In the second chapter of Exodus, Moses’ mother places him in a papyrus basket to protect him. Pharaoh had ordered all baby boys born to the Israelites killed. The basket was placed among the reeds on the bank of the Nile. In verse 4, it’s said that “his sister stood at a distance to see what would happen to him.” Most scholars believe that this unnamed child was Miriam. The story continues that when Moses was rescued by the Pharaoh’s daughter, his sister asked if she could get a Hebrew woman to nurse him.

It’s estimated that Miriam was about 12 when her brother was born. She was very quick to protect him, not revealing her own relation to the baby. Her family were slaves, and the Pharaoh’s daughter was royalty. It took a great deal of confidence for Miriam to approach Moses’ rescuer.

Then Miriam the prophet, Aaron’s sister, took a timbrel in her hand, and all the women followed her, with timbrels and dancing. Miriam sang to them:

“Sing to the Lord,

for he is highly exalted.

Both horse and driver

he has hurled into the sea.”

Miriam is giving thanks for being rescued from Pharaoh’s army at the Red Sea. Historians believe that this incident took place when Moses was around 80. Miriam would have been in her 90s at this point. She was recognized as a prophet of Israel and led the women in worship to remember what God had done.

The Bible doesn’t portray its heroes and heroines as paragons of virtue. Often, the reader sees the good in the heroes as well as the bad. Miriam is no exception. She was the steady supporter of her brother, but in the book of Numbers, chapter 12, she and Aaron begin to question Moses’ leadership and his wife. Miriam and Aaron asked, “Has the Lord spoken only through Moses? Hasn’t he also spoken through us?” It was a rebellion against Moses that couldn’t go unanswered. The two were sowing seeds of division and discontent.

Miriam is struck with leprosy, a serious skin disease. Aaron begs the Lord for forgiveness. Moses begs the Lord to heal Miriam. The leprosy of the Bible is not what it is known as today. Under Jewish law, lepers were segregated from the camp. It wasn’t just a physical affliction, but a spiritual one, too. Miriam was banished to a tent outside of the community, but she was healed after seven days. The camp stayed in place until she was well again.

It’s thought that Miriam didn’t live long after that awful week. She was mourned by the people of Israel for 30 days, but she’s remained an important figure in biblical tradition. Modern Jews might add a piece of fish on the Seder plate to remember her place during the Exodus. Some Jewish feminists leave a cup of water for her next to the cup of wine for the Prophet Elijah.

The Bible might be short on what is known about Miriam, but her place in Jewish tradition cannot be overlooked.