Who Is Interred in the National Cathedral? 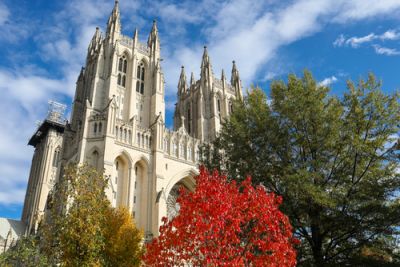 It was recently announced that Matthew Shepard would be interred at the National Cathedral. Shepard is a notable LGBT figure who was a victim of a hate crime in 1998. His parents were concerned about a burial site becoming a target for desecration, but twenty years after his death, he’s being given a permanent resting place. He joins some notable people who are also interred in the cathedral. Here’s a roll call.

Wilson is the only president buried in the nation’s capital. He is only the third president to have a tomb in a church. John Adams and John Quincy Adams are buried in a family vault in a church in Quincy, Massachusetts. It’s interesting that Wilson was buried in an Episcopal church, because his father helped found the Presbyterian Church in the Confederate States of America. Wilson was a member of a Presbyterian Church in South Carolina.

Edith Wilson served as first lady and is often remembered as “Acting First Man.” When Wilson had a stroke during his presidency, she acted as a steward of which matters would be brought to the president. It’s considered interesting because women hadn’t won the right to vote, yet she acted as the president of the United States. She is buried next to her husband in the National Cathedral.

Grant is probably best known for being the first grandchild of Ulysses S. Grant, the 18th president of the United States. She was born in the White House. However, she is a historian in her own right of the Russian Revolution in 1917. She married a Russian prince and lived in Ukraine and St. Petersburg before the revolution. She escaped via Finland and moved back to the United States. She was active in politics until she died at the age 99. Her memorial in the New York Times does not identify why she was buried in the National Cathedral.

Dewey is the only person in the United States to attain the rank of Admiral of the Navy, equivalent to a six-star admiral. He began his naval career at the United States Naval Academy in 1854. He made a name for himself during the Spanish-American War, when his fleet was instrumental in the capture of Manilla. He was part of the General Board of the United States Navy from 1900 until he died in 1917. This board made policies for the Navy. He was also on the board of directors for the Boy Scouts of America in its early days.

Wasson, like Shepard, was tragically killed. He served as a diplomat in Australia, Honduras and Nigeria before his appointment as the Consul General for the US in Jerusalem. It was April 1948, about one month before the British Mandate over Palestine expired. The region was a hot zone. Wasson tried to stop the Arab Legion from firing on Jewish buildings. Wasson was killed on his way back to the US Consulate after a meeting at the French Consulate where he was trying to find a truce. It’s unknown who the shooter was. Some believe he was shot by the Israelis, but Wasson’s last words were to claim he had been shot by Arabs. It’s been over 70 years since his death. People are still arguing over the status of the country. It’s sad that a man involved only in peace had to die in the conflict.

Take a trip to the National Cathedral and visit the resting places of these amazing and influential people.