Who Is Daniel and Why Does He Have a Fast Named After Him? 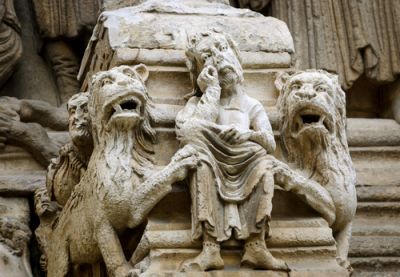 Chris Pratt recently announced that he was doing the Daniel Fast. The Daniel Fast is based on Daniel, a prophet from the Old Testament. Daniel’s most famous story is when he was in the lion’s den. Daniel was accused of worshiping God instead of the king, so the king threw Daniel into the lion’s den. Daniel prayed for deliverance and the lions never touched him. He emerged alive and was restored to his position. The men who accused Daniel were also destroyed.

The Book of Daniel

The Book of Daniel is considered an apocalyptic book, foretelling the end times through Daniel’s prophetic visions. But before Daniel, the man, came to be known as a prophet, he was put through the wringer. Daniel’s story begins with Daniel taken captive by the Babylon king. The king wants some of the noble, young men from Israel brought into the palace to serve the king. These men were to be educated and fed the finest food and drink.

Daniel, who was renamed Belteshazzar, refused to eat and drink the king’s food and wine. It’s suggested that the food was not kosher under Jewish law and would defile Daniel. Daniel spoke to the commander of the officials and asked to only eat vegetables and drink only water. The commander was concerned that this would cause Daniel to become weak and malnourished, so Daniel asked that he and his three friends who were with him be tested for 10 days. At the end of the test, Daniel and his friends appeared healthier than the men who ate the king’s food.

Daniel found favor with the king. At the end of his training, he and his friends entered the king’s personal service. They were found to have much wisdom and understanding. Daniel moved up in the government, but he never lost his faith in God.

The Daniel Fast allows fruits, vegetables, whole grains and legumes, healthy oils, and nuts and seeds. It excludes meat and animal products, dairy products, eggs, all sweeteners (even natural ones), leavening agents, processed foods, solid fats and beverages except water. It does sound restrictive, but it can be a time of renewal. It’s also not designed to be followed indeterminately.

Is Daniel a Myth?

Some modern scholars believe that Daniel never existed. Six different cities claim to have Daniel’s tomb. The tomb in Susa, in southern Iran, is the most famous and is a popular pilgrimage site. Judaism doesn’t consider Daniel a prophet, but a member of the Babylon diaspora. However, copies of the Book of Daniel were found in the Dead Sea Scrolls.

Most Christian churches recognize Daniel as a prophet. The Roman Catholic Church celebrates his feast day on July 21. Matthew 24:15 makes a reference to Daniel. Jesus recognized Daniel as a prophet, but that is the only time he is mentioned in the New Testament. Daniel is mentioned in Muslim literature, but not the Qur’an. He is described as a pious man of princely heritage. The Baha’i faith considers Daniel a minor prophet.

The Book of Daniel isn’t easy to understand in modern times, but the history and politics is very interesting. If you undertake a reading of this book, get a good commentary or study guide to help you put it into context. Check out the Daniel Fast and see if it’s right for you. It might be just what you need to refocus on your spirituality and faith.