What Is Jacob’s Ladder? 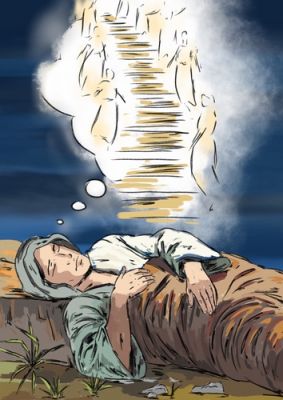 Jacob’s Ladder has many references. It could be a landmark staircase in Brisbane, Queensland, Australia. A covered footbridge in New Zealand claims the name of Jacob’s Ladder. US Route 20, the longest road in the United States, is nicknamed Jacob’s Ladder. Israel holds a music festival by the name. Huey Lewis and the News, Mark Wills and Rush have all recorded songs by the same name. At least two movies have the name. Flowers, toys and a knife are called Jacob’s Ladder. What do they all have in common?

The earliest reference to Jacob’s Ladder is found in Genesis. Isaac, son of Abraham, had two children, Esau and Jacob. Esau was the oldest, but the boys were twins. Traditionally, a father would bless the oldest son. It was a great honor to receive this blessing, which included information about the inheritance, words of encouragement and even prophetic words about the future.

Esau deserved the blessing of Isaac, but Jacob tricked both Esau and his father into getting the blessing. Although Isaac gave Esau a blessing, it was considered inferior. Esau was furious with Jacob, to the point of wanting to kill his brother. Jacob was sent to live with his mother’s father.

When Jacob slept one night on his journey, he had a dream. Genesis 28:12 says, “He had a dream in which he saw a stairway resting on the earth, with its top reaching to heaven, and the angels of God were ascending and descending on it.”

Jacob woke up and named the place “Bethel,” meaning “House of God,” for he believed that the place was the gate to heaven. Abram built an altar at Bethel years before his grandson passed through. Bethel is mentioned again in Genesis 35, marking the site as the place where Jacob changed his name to Israel.

Islam, Judaism and Christianity all interpret Jacob’s Ladder differently. In fact, within each religion, there are multiple interpretations. In Christianity, it’s often that Jesus is the mythical ladder, bridging the gap between earth and heaven. Some Jewish sages also believe that the ladder is a link between different worlds. Jews typically don’t believe in heaven, but the ladder could represent the tabernacle that restores a person’s relationship with God. One early Christian theologian interprets Jacob’s Ladder as successive steps toward excellence.

Jacob’s Ladder is also interpreted as a personal dream for Jacob. He may have received Isaac’s blessing in deceit, but God still chose him to lead the Israelite people. Jacob went on to his grandfather’s home after his dream. He worked for his uncle and fell in love with his cousin, Rachel, and asked to marry her. The agreement was that Jacob would work for seven years for the uncle in order to marry Rachel. On his wedding day, in a strange act of irony, Jacob was deceived by his uncle. The veiled bride Jacob married was Rachel’s older sister, Leah. Jacob’s uncle had switched the brides.

On Jacob’s return, he discovered Esau was coming to meet him. Over 15 years had passed, but Jacob did not know how Esau would react. Jacob sent a large gift of flocks and herds to Esau. When the two brothers finally met, their reunion was an emotional one. The rift was healed. The two brothers buried their father together.

Jacob’s Ladder is an interesting biblical reference that you should recognize to help you understand the deeper meanings of works that refer to the story.