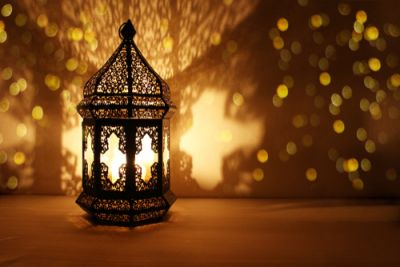 Per Islamic tradition, it was on the 27th night of Ramadan, the layat al-Qadr (Night of Power), that Allah (God) revealed the Quran to the Prophet Muhammad. On the other four odd-numbered nights of the last 10 days of Ramadan, Allah sent down to Muhammad the following four scriptures:

The main hallmark of Ramadan is daily fasting from sunrise to sunset. This fard (obligatory) fast applies to all adult Muslims except those who are ill, elderly, pregnant, breastfeeding, menstruating, diabetic, or traveling. The fast applies to more than just food and drink, however. Practicing Muslims must also abstain from smoking, sexual relations, and any form of sinful speech and behavior.

The suhoor (predawn meal) includes the first prayer of the day. The iftar (nightly feast) ends the period of fasting and generally begins with the eating of dates. Islamic tradition says that Muhammad himself broke his first Ramadan fast by eating three dates.

Iftars can be for family only or for numerous friends and neighbors. The most popular entrees are lamb kebabs with grilled vegetables, lamb stewed with wheat berries, or roast chicken with rice pilaf studded with chickpeas. While most people drink water during this meal, they can also usually choose to drink milk, juice, soft drinks, and/or caffeinated beverages. Rich desserts generally are the most important part of the iftar, and some of them are made only during Ramadan.

Even on non-Ramadan days, all practicing Muslims must pray five times a day, the specific prayers being as follows:

Many Muslims add a sixth prayer, the Tarawih, during Ramadan, although this is not compulsory. As to where Muslims pray, in a mosque or at home are the two most popular places. Some mosques prohibit women, and those that allow them have separate entrances for them and separate spaces for them inside. Supposedly Muhammad himself said, “The best places of prayer for women are the innermost apartments of their houses.”

Charity forms a large part of Islam, especially during Ramadan. The obligatory zakat (poor rate) requires Muslims to give a fixed percentage of their income to the poor, while sadaqah means voluntary charity that Muslims can, and often do, choose to give above and beyond the zakat. In Islamic tradition, Muslims are more handsomely rewarded for their charitable donations and good deeds during Ramadan than at any other time of the year.

While Ramadan itself is not one of the Five Pillars of Islamic Faith, the fasting, prayers, and alms-giving so strongly associated with Ramadan are. So is the Shahadah, the Muslim declaration of faith that says “there is no god but Allah, and Muhammad is the messenger of Allah.”

The fifth Pillar of Faith is that of the hajj, the pilgrimage to Mecca that each Muslim is expected to make at least once during his or her lifetime. It takes place during the last month of the Islamic calendar and can occur as early as July or as late as November.

Despite Ramadan not being a Pillar of Faith, it still remains the Islamic Holy Month. As such, upwards of 93% of Muslims worldwide observe Ramadan each year.