Tropes in Film and Literature: Moses and the Bulrushes 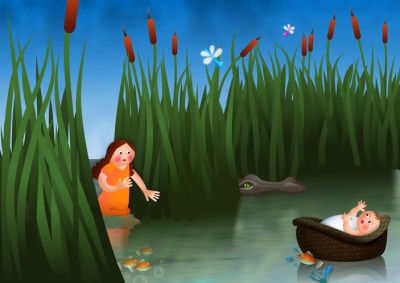 One Israelite woman defied the authorities and hid her baby until the boy was three months old. When she couldn’t hide him, she made a basket, placed him in it and then placed the basket in the Nile River. Pharaoh’s daughter found the basket and realized it was a Hebrew baby. She named him Moses, and he became her son.

If you’ve ever seen the movie “The Ten Commandments” you probably recognize the scene. Moses’ sister watches over him and directs pharaoh’s daughter to Moses’ own mother as a nurse for him. Moses grows up knowing his heritage, but has the benefits of living in the palace. Eventually, he has to choose between his people or his privilege. If you’re unfamiliar with the tale, spoiler alert—he chooses his people. He lives under the oppression of the Egyptian people, until he kills an overlord. Moses runs away only to find God, who sends him back to Egypt to free the Israelites.

Saving an infant from calamity is a common theme in many of today’s greatest books and films. You’ll probably recognize these foundling tales:

This first Star Wars movie introduces Luke Skywalker and Princess Leia. Luke was given to his aunt and uncle by Obi-Wan. Leia was given to Bail Organa, to hold a place in the rebellion when she grew up. Luke is more like Moses, having to learn who he is and the role that he plays. Fortunately, they work together to save the universe. At least until the Dark Side rebuilds.

Although Harry didn’t have a life of privilege with his aunt and uncle, he was saved until he could come into his own to fight the villain. He goes through his own set of difficulties while he learns his heritage and skills.

“The Marvelous Land of Oz”

This second L. Frank Baum book turns the trope on its head. Tip is the protagonist. His mission is to find the missing Princess Ozma of Oz. The wizard gave her to a witch. Ozma was turned into a boy. Tip finds out that he is Ozma.

In this animated movie, it’s revealed that Po is a foundling. How else could a panda have a goose as a father? It’s claimed that Po’s parents abandoned him, but you have to wait until Kung Fu Panda 3 to find out how true that is.

Kal-El is sent to earth as a baby by his father to escape the destruction of Krypton. Can you see parallels between Jor-El and Moses’ mother? Kal-El is adopted by Jonathan and Martha Kent, who raise him to be a good son and teach him right from wrong. However, he is much different than humans and has to come to terms with who he is.

The Bible is probably the most alluded-to book in all of literature. The references don’t always scream out, “This is based on a story in the Bible.” When you see the foundling story in what you’re reading or watching, you can look back on the Moses story and see how they parallel or part from each other. It’s just a way to add depth and meaning to the stories you read and watch.