The Role of Religion in US Elections 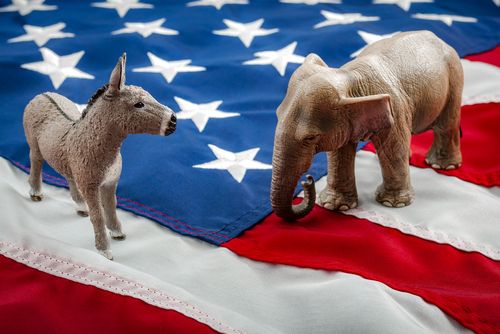 With presidential elections quickly approaching in the United States, it can be interesting to see the different ways in which candidates appeal to voters. With religion being an important part of life for many Americans, it is natural that the results of voting can be swayed by where politicians stand in relation to different faiths. While separation of church and state is an important part of the United States' policies, religion still plays a role in politics.

The Impact of Religion

Americans as a whole tend to be more religious than similarly wealthy nations, with around 87% stating that they believe in God in a recent Pew Research Center survey. While Christian groups are some of the largest in the country, there are also many Jewish and Muslim citizens as well as large numbers of those who don't identify with any particular religion. It is almost impossible for a candidate to please everyone, so they often pick and choose the groups they reach out to.

Historically US presidents come from Christian backgrounds, though some have been notably more devout than others. How much of a role religion has played in putting people in office and affecting the decisions they make once there can be a subject of some debate. Since the separation of church and state is an important part of religious freedom, it can be a gray area as to when the president should and shouldn’t use his religious background as political influence.

Of course, there is not always a consensus on who best exemplifies the values of a religious group, and there can be a lot of debate even within similar groups. A good example of this is Donald Trump's campaign, which simultaneously seems to try to appeal to some Christians while pushing others away. For instance, his recent display in which he posed with the Bible in front of Saint John’s Church in Washington, DC, caused an uproar among many Christians. Despite this and many other controversies, he continues to benefit from a lot of support from white evangelicals, one of the largest Christian groups in the nation.

On the other end of the spectrum are politicians such as Bernie Sanders who base their platforms largely on secularism. Sanders occasionally identifies himself as Jewish, but religious appeals to voters rarely enter into his platform. Instead, he focuses on morals that can be seen as more universal. Of course, this can be its own kind of political appeal, but it may fail to gain the same support from certain groups as an emotional plea to their spiritual values. Historically, even presidents who aren't particularly religious themselves have made an effort to garner support from large denominations.

While it remains a matter of opinion whether individuals should allow their religion to impact their decisions in voting, the fact of the matter is that politics do affect religion and vice versa. As can be seen by Supreme Court cases related to religious values that lead to national policies, it is impossible for the two to operate entirely independently from one another. While religious alignment is far from the only factor that goes into people's decision to support a candidate, it remains a large consideration for many.

Many presidents use an emotional appeal to people’s faith in order to gain their votes. Religious groups make up a large demographic in the United States, with evangelicals and other Christian groups being some of the largest. People belonging to these faiths can be inspired to vote for a candidate if they believe that person will make decisions that support the values of their religion. Appealing to the biggest groups can make a substantial difference in a candidate's chances of success.w

Religion is the main reason the planet is in such a mess today. Patriarchy is an unhinged bully based on a system of conquering and divide through fear tactics. People who use God as a resource and excuse to murder, divide, enslave, rape, divide, and worship according to their specific direction are selfish. How can a book that is thousands of years old, endured numerous interpretations to suit the governing body at the time still have relevance today? You can not prove that a male God is the supreme ruler of the universe. Even the word - God in the Bible translates into "breath" when you take a sharp inhale out of wonder. There is nothing masculine or feminine about that at all. Breath is life, and life is about experiencing our divinity as spirits in bodies, not to purely identify as humans, who are separate from their divine origins. Just my opinion amongst many.