The Limits of Empathy 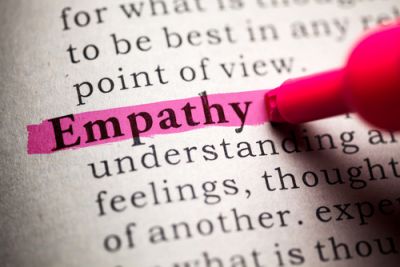 Empathy is a huge buzzword nowadays. Depending on who you believe, today’s world has too little or too much empathy.

At its core, empathy is the ability to understand and share someone else’s feelings. Actually, however, psychologists claim that there are really three distinct types of empathy: cognitive, emotional, and compassionate.

As its name implies, cognitive empathy takes place in your mind only. When you cognitively empathize with someone, it means that you can put yourself in that person’s place and see his or her perspective. It does not mean that you can feel what the individual is feeling.

That’s where emotional empathy comes in. Here you can not only understand the person’s situation and perspective but can also feel his or her emotions with regard to it. It’s sort of like you “catch” the emotions. The downside to this is that you may feel the emotions to the extent that you become overwhelmed by them and are consequently unable to help the person.

Which brings us to the third type, compassionate empathy. Here you not only understand the other person’s situation and feel his or her emotions, but you also can take action to help alleviate the situation or mitigate the problem.

So is there a limit to how much empathy, of whatever type, you can “spend” on someone else? Psychologists say yes.. In fact, they say we are hardwired for the amount of empathy we exhibit to those in our “in group,” i.e., our personal circle of family and friends, as opposed to those in our “out group,” i.e., everyone else. It’s the old “us versus them” phenomenon that has been part of the human experience since the beginning of time.

Us versus them has served human beings well over time. Even in the hunter-gatherer period of human history, it served each individual’s best interests to cooperate with his or her own group and fight against opposing groups going after the same scarce food supply. It was not only a way of life but actually the only way one’s own life could be prolonged.

What has changed dramatically over time, however, is who we consider to be “us” as opposed to “them.” In today’s modern world, “us” may well include such people as those in our neighborhood, our community, our city, our state, our region, our country, etc. For most of us, our “us” circle continues to expand as we grow up and become responsible adults. This is why we can empathize with U.S. hurricane victims or others dealing with natural disasters. But do we empathize equally with natural disaster victims in other parts of the world? Not so much.

So don’t fall into the guilt trap expounded by those who might say you are somehow morally deficient if you don’t donate to their humanitarian cause or join their crusade. There aren’t enough hours in the day for you to attempt to solve the problems of every inhabitant of the world. Nor do you have the unlimited resources and finances required to do so. It is okay for you to choose who you can help and how you go about doing so.