The Importance of Religion for Humanity 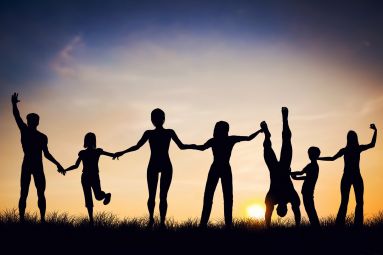 As far back into our history as we can go, humans have always maintained some semblance of religion or spirituality. Myths, superstitions, cults and spiritual beliefs exist in every culture on every continent from every era of human history. These beliefs are as varied as the people who hold them, ranging from the god of Abraham, Isaac and Jacob followed by the adherents of three religionsÃ¢ "Judaism, Christianity, and IslamÃ¢ "to the kami spirits of Shinto in Japan, to the devas and asuras of Hinduism common in India. With such diverse beliefs, it can be hard to see any commonality until one examines below the surface.

Systems of belief seek to answer a string of common questions. Who are we? What is this world? Where do we go when we die? These systems also seek (or sought) to answer questions about the natural world humanity inhabits. The explanation of the creation of the world (cosmogenesis), natural phenomena like thunder, lightning and earthquakes, and where animals fit into the whole picture are all aspects of religious and spiritual thought.

Human beings have known little of what we now call science for much of its history. Because today's telescopes, electron microscopes and computers are all recent inventions, humans had to rely on their own imagination, a power worthy of respect in its own right, to fall back on throughout its history. A human being's ability to conceptualize objects that do not exist is very valuable. The creator of the stone axe must have first imagined what it was to look like before they crafted it. While this ability is not unique to humans - chimpanzees, for example, commonly use primitive tools - it is one which humans have honed into an exact and intricate science. When coupled with humanity's ability to harness language for symbolic representation of ideas and objects, imagination gives birth to the understanding of causality, the crux of religious and spiritual beliefs. Causality gives rise to common ideas like creator gods.

Here again, language plays a part. The oral traditions of early peoples are no different than the oral traditions of peoples today. One person's idea of how the world was started is told to a group of people who then in turn tell it to other people. This oral migration of ideas was spread temporallyÃ¢ "from one generation to the nextÃ¢ "and geographicallyÃ¢ "from one tribe to the next. The Genesis story in the Bible says: "The earth was without form and void, and darkness was upon the face of the deep; and the Spirit of God was moving over the face of the waters" (Gen 1:2 RSV). From what we know about Abraham he was from the city of Ur in Mesopotamia (Gen 11:31). The early Abahamites would have been intimately familiar with the religious worldview of their Babylonian neighbours in Mesopotamia. This is represented in the creation stories themselves in linguistic vestiges. In the EnÃƒ"ma EliÃ… , the Babylonian creation story dating from before Hammurabi, Ã‚ the god Marduk slays the goddess Tiamat and thus creates the world from her remains; Tiamat was the primordial goddess of chaos, the deep and the ocean. In Genesis 1:2, the word used for "deep" is tehom, a word whose etymology resides in the name Tiamat, a vestigial reminder of the Babylonian ancestry of the people who would become the Israelites. Other similarities exist and to name one which is so prominent that it is blatantly expressed in two modern religions alongside an ancient source is the epic of Gilgamesh, the story of Noah's flood, and the deluge story from Hinduism. The interrelated nature of these stories in both linguistics and literary form shows the natural progression of the oral tradition.

These stories, created by the natural mental faculties we had developed, helped the human species explore and explain the world around them. By pushing the boundaries of what can be observed and postulating on what cannot, humans nurtured their primitive sense of imagination and curiosity into the modern world. Though many of these primordial observations have been discarded in light of what is now known through modern science, there is no doubt that these early spiritual beliefs acted as a guide for humans to explain the world around them.

Religion, like language and culture is not static. At the Universal Life Church we believe that we are children of the same universe and draw from a myriad of different paths and people. To learn more about the organization and online ordination please visit www. .