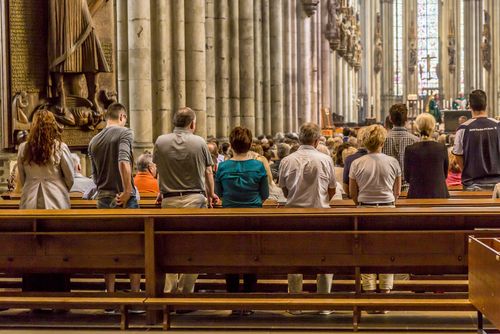 The year 2020 is an interesting one for Catholic voters. Presidential candidate Joe Biden has a trait that may set him apart from other candidates. Biden is a self-proclaimed devout Catholic who has been a lifetime member of the Church. While not all Catholics agree with some of his more liberal standpoints, his religious views may allow him to pull voters from groups who would traditionally vote for the opposing party.

While Biden is a self-proclaimed devout Catholic, he does have controversial standpoints on abortion as well as some other current issues that the Church disagrees with. As he goes head to head with Donald Trump, another candidate who uses religious arguments to back his opinions, it will be interesting to see which way more conservative Catholics end up leaning.

The Black Lives Matter movement has become more prominent in 2020 as people rise up to protest the killings of African Americans by police officers. The issue of police brutality can be a touchy subject, but it is one that people from all walks of life have had to address this year. According to a recent article released by the New York Times, in 2018 about six in 10 Catholics believed police killings of black men were an unfortunate coincidence rather than a racial issue. Since 2019, these opinions have not changed much, and there can be hesitation by many Catholics to get involved in issues related to Black Lives Matter. The situation is made more controversial by the destruction of religious statues by BLM protestors. One notable example was the tearing down of a statue of Father Junipero Serra, whom protestors claim mistreated Native Americans while trying to convert them to Catholicism. Time will tell whether these events change the opinions of Church members.

While it is easy to generalize groups of people who belong to the same religion, it is important to keep in mind that not all Catholics are the same. As with any group, there are those who are more set in tradition and those who are more open to change. Catholic adults represent one of the largest groups of voters that a presidential candidate can pursue, but their political beliefs are far from uniform. Catholics are often split nearly evenly when it comes to voting, with one half supporting more liberal policies and the other supporting those that are more conservative. This makes it nearly impossible for one candidate to please all Catholic voters, who can be an especially interesting group when responding to different political issues.

Catholics and US Politics

Catholics make up a large portion of the population in the United States, and as with any religious group, people belonging to the Catholic Church tend to have somewhat similar responses to political issues. Something that sets the Catholic Church apart is the almost even divide it has between members who lean conservatively in politics and those who are more liberal. It is an interesting organization to pay attention to, and how members end up voting may have a major impact on politics in the United States.

In the saga put away a peaceful shower is symbolic of the presence of the Holy Spitit, Rain To fall or drop like rain; rained, or it has rained The rainbow forms a striking part of the vision in Riff If Aches set back Jeff Eggs pepper Sew Solve My sub Wood moth Eggs He was dying Edom. And Jacob the same Sabs bull Raft A blank or empty cartridge is symbolic of ineffective prayer Bullet

Agreed! We cannot and should not shoot ministerial blanks at parishioners or risk ineffective prayer bullets.