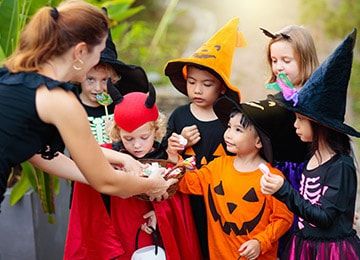 In Part I of this series, we explained the beginnings of Halloween and how the Celts, Romans, Catholic Church, and immigrants all contributed to the way in which we celebrate this beloved holiday today. In Part II we examine some of the traditions most closely related to Halloween today.

The custom of trick-or-treating began in medieval Europe. Children and adults alike went from house to house dressed in costumes and requested food and/or money in exchange for abstaining from playing tricks or perpetrating pranks on their neighbors. In America, trick-or-treating evolved into a kids-only activity, with the focus on inexpensive candy treats, not tricks. Not surprisingly, candy sales peak every year around Halloween. In fact, the holiday has become a huge commercial success in America. Between the candy, the costumes, and the masks, Americans spend nearly $6 billion each year, making Halloween the second largest commercial holiday, second only to Christmas.

Back in the day, people lit their way while trick-or-treating with lanterns made by hollowing out gourds or small pumpkins and placing candles in them. Slowly but surely, this custom evolved into carved-out pumpkins with humorous or scary faces, still lit with interior candles, being placed on porches to guide neighborhood children to the houses of those participating in Halloween treat-giving.

The name “jack-o’-lantern” comes from the old legend of Jack O’Lantern, an Irish folk hero. According to the story, a drunkard named Jack trapped Satan in a tree one Halloween night by cutting a cross into the tree’s bark. He wouldn’t let Satan go until the devil promised never to claim Jack’s soul. Secure in this bargain, Jack continued his wicked ways throughout his life. But when he died, Heaven refused to admit him, so he sought admittance to Hell instead. Satan, however, upheld his end of the Halloween bargain and likewise refused Jack admittance, hurling a burning coal at him. Poor Jack. With nowhere to go, the dead man placed the coal into a hollow turnip to serve as a lantern while he endlessly wandered the world looking for his eternal resting place.

In Part I, one of the things we discussed was the Roman Empire’s use of the apple to symbolize Pomona, their goddess of trees and fruit, whom they honored as part of their version of what ultimately became Halloween. Many customs and traditions involving apples consequently became part of the holiday. One such tradition involved placing a bunch of apples into a large bowl of water. The first unmarried women to successfully capture an apple in her teeth was supposed to be the next one to get married. A variation of this involved young women marking apples with the initials of available suitors. Whichever apple a specific woman captured, its initials supposedly foretold who her eventual husband would be.

Whether as a trick-or-treating child or a party-going adult, who hasn’t dressed up in a costume on Halloween? This tradition dates back to the ancient Celts who dressed themselves in in the hides and heads of dead animals on the night before their November 1 Samhain celebration commemorating the end of the harvest and the beginning of winter. By the Middle Ages, poor “soulers” dressed in costumes went around town on All Hallows Eve begging the rich for soul cakes in exchange for praying for their souls. Medieval Europe also saw the advent of mummers, costumed strolling musicians who conducted parades through towns, singing, dancing, and playing their lutes and other instruments. Again, it was the Irish and Scottish immigrants who brought these practices to America in the late 19th century.

So there you have it. Ten fascinating facts about Halloween that you probably didn’t know.