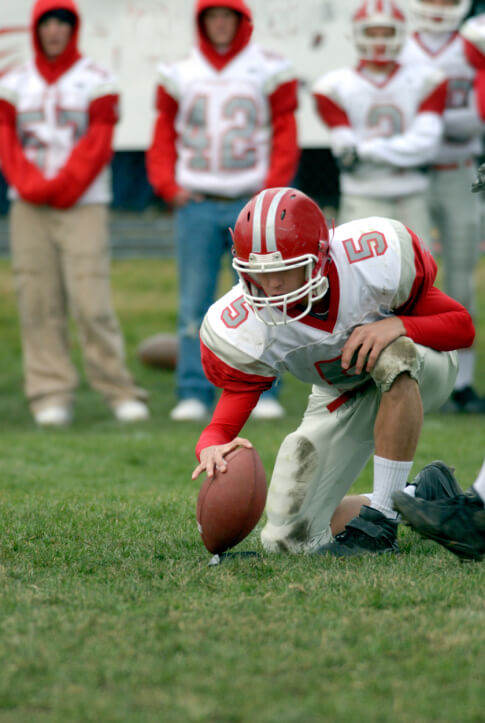 For the last couple of months, the media has been covering a news story about a football coach who has been suspended after he refused to stop praying in the middle of the football field after games. Even though his district told him it was against district policy, he went ahead and prayed, although he did at first agree to comply. Many people who were against this coach praying on the football field were uncomfortable with it because they felt that since he was in a place of authority, he shouldn't be publicly praying. They didn't want players or students to feel like they needed to pray as well, even though the coach never asked anyone to join in. However, most people supported him and even joined him in his prayers at the middle of the football field. Now, there is a similar story this week, only this time it is about a student instead of a coach. Pedro Banda was suspended for one game after he pointed his fingers up to God for several seconds after scoring a touchdown.

The reason Banda was suspended was because the officials considered the gesture to be taunting the other team. This made the second penalty Banda had, so he was ejected from the game and suspended for one week. The play was considered to be excessive celebration, which is considered unsportsmanlike conduct. Earlier in the game, Banda had been penalized for arguing with a player on the opposing team. What made the suspension even worse was the game he would be suspended for was his football team's first playoff game in over 20 years. After seeing video, many are outraged at the ruling and immediately called for the ruling to be reversed. The video shows Banda diving into the end zone, standing up, briefly touching his facemask, and then pointing his fingers upward. It isn't surprising he was so excited about the play:

The incident happened immediately after he scored a touchdown that helped ensure his team's victory. The win is what determined whether or not his team would make it into the playoffs.

Banda's gesture wasn't in anyone's face, no words were exchanged, and no players seemed to have a negative reaction to the gesture. Because of this, many felt the officials got the call wrong.

Banda stated he was not trying to taunt the other team at all, and all he was doing was trying to give the glory to God. He explained he realizes not everyone gets this kind of opportunity and some people don't have the ability to play football, so he is thankful to God for the chance. The Arizona Interscholastic Association looked into the ruling and ultimately made the decision to reverse it. Banda will now be allowed to play in the team's playoff game, much to the relief of him, his coaches, and fellow teammates. It isn't common for penalties called during a game to be overturned by a committee. However, this situation was a bit different because most penalty calls do not lead to a player being ejected or suspended for a game. A statement released by The Arizona Interscholastic Association read: "The appeal committee has decided to give the player the benefit of the doubt and overturn the call." They also stated they "did not find that specific action met the 'excessive' or 'prolonged' rule."

Because of the reversal, Banda gets to join his teammates in a very important game. Banda says he will continue using the gesture to praise God every time he scores.

Always give glory to GOD, no matter the cost, because without GOD, there is no you.