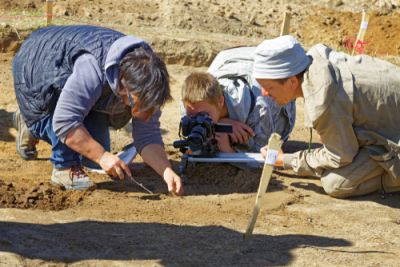 Archaeology doesn’t always get the press it deserves. That could be because it’s very difficult to date historical artifacts. Maybe it’s because history just isn’t that exciting. But these archaeological developments from 2018 could have a significant impact on what is known about biblical times. It will be interesting to watch these developments over the next few years to see what else can be learned.

A Copper Ring Belonging to Pilate?

The ring in question was discovered in the 1960s during excavations in Herodion, an area near Bethlehem. A team of researchers currently working on the area used intense cleaning and a special camera to identify a phrase stamped on it, “of Pilate.” Pilate was the governor of Judea when Jesus was crucified. The ring has been dated to the timeframe of Pilate. As more information is uncovered from other artifacts discovered in the same area, it could provide even more data about the ring. Pontus Pilate was a key figure in the crucifixion of Jesus.

Shivta, a UNESCO World Heritage Site, is known for its link to early Christianity. Just a few months ago, in November, archeologists uncovered a painting of Jesus being baptized. The painting is estimated to be over 1,500 years old. It’s the first painting of its kind discovered in the Holy Land that is that old. Another painting found in the village demonstrated Jesus’s transfiguration, and other paintings have been discovered in the area.

In the Golan Heights area in Israel, an entrance gate to a biblical city was discovered. The Old Testament name for the city was Zer, but in the New Testament, it was called Bethsaida. The gate may relate to the 12 tribes of Israel. Many miracles that were performed by Jesus occurred in Bethsaida. In July, an archeologist told a news station that only about 4 percent of the site has been explored. As it continues to be unearthed, it may tell us much more about biblical times.

The Gospel of Mark is regarded as the earliest written scripture of Jesus. Some have thought that Mark was simply a retelling of the Gospel of Matthew, but identification of an ancient fragment dating to the first century could provide more information about the timeline of the gospel. It was originally thought that the fragment was from the first century, but experts now believe it is from A.D. 150 to 250. The piece is very small, just a little more than 1.5 inches square. It is a significant find.

King David is a key figure in the Old Testament. It’s thought that he wrote many of the Psalms. His narrative is told in 1 and 2 Samuel. Solomon, King David’s son, also has a large role in the Bible. Some scholars have doubted that the civilization of King David actually existed, but last May, archeologists found a large ancient city at Tel’Eton that proves civilization existed during King David’s time. No artifacts have been found that are directly related to King David, but it’s a step in the right direction.

Pool and Fountain Discovered at an Ancient Church Near Jerusalem

According to Fox News, archeologists discovered a 1,500-year-old pool at Ein Hanniya Park. A rare silver coin from the fourth century B.C. was also uncovered at the site. The pool is from the Byzantine period. It’s thought that the site could linked to a story told in the Book of Acts in which Philip baptized an Ethiopian eunuch who had great authority in his home country. It is unknown what the discovered pool was used for, but the pool system could be where this event occurred.

Some archaeological finds may not get much press. However, they are windows to another time and can tell us much about what life was like.