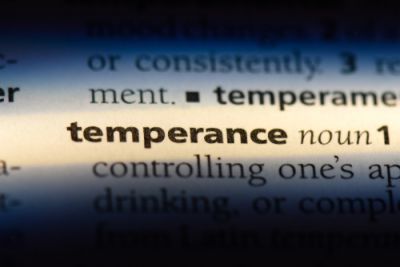 We bet one of the first things that came to mind with this virtue was the temperance movement that led to Prohibition in 1920. John Wesley, founder of the Methodist Church, believed that drinking liquor was an evil to be avoided unless it was absolutely necessary, probably because many types of liquor were also considered medicinal at the time. However, temperance didn’t always mean abstinence.

Temperance is defined as “moderation in action, thought, or feeling.” It could mean restraint or self-control. Plato and Aristotle advocated temperance, even though the word itself comes from Middle English. Merriam-Webster reports that the first known use of the word was in the 14th century, but the idea has been around for much longer.

A person can have temperance by restraining from violence. Temperance can refer to avoiding excesses, such as not overeating or overbuying, but it’s almost always about self-restraint and control. It’s a choice. Self-control can be applied to all areas of life. The Ten Commandments admonish Christians and Jews to avoid adultery and covetousness. Without outright mentioning temperance, the virtue is emphasized. A scripture in Proverbs advises not to eat too much honey, lest you vomit.

Many of the Epistles have verses about temperance. Paul considered it important to the Christian lifestyle.

Titus 2:12: “Teaching us that, denying ungodliness and worldly lusts, we should live soberly, righteously, and godly, in this present world.”

Galatians 5:22–23: “But the fruit of the Spirit is love, joy, peace, longsuffering, gentleness, goodness, faith, Meekness, temperance: against such there is no law.”

Temperance is used in the King James Bible, but the philosophy is not limited to Christianity. In Buddhism, drunkenness is to be avoided. Another precept says to avoid “misconduct concerning sense pleasures.” Hinduism has a concept called “damah,” which means self-restraint. Jainism has a vow of non-violence and celibacy, which are also traits in temperance.

How Temperance Came to Mean Abstinence

In the temperance movement, moderation was encouraged at first. Alcohol addiction was considered immoral, not a disease. The early temperance movement was mostly about moral reform. Inebriation was described as a sin. In one revival in the 1830s, salvation could only be received if the person pledged temperance.

Abstaining from alcohol, or teetotalism, came out of a stricter need for temperance. Legislation was recommended in the 1800s, but many lawmakers did not want to prohibit all alcohol. Locally, some states were able to ban or restrict alcohol, but it wasn’t until World War I when the temperance movement really gained traction. President Wilson wanted to preserve grain for food production, rather than use it to make alcohol.

The temperance movement believed that banning alcohol would alleviate poverty and other social injustices. The Anti-Saloon League wanted complete abstinence of alcohol, believing that individuals were unable to practice temperance on their own. Carrie Nation, one of the most radical leaders in the temperance movement, would attack saloons with a hatchet to draw attention to the problems caused by alcohol.

In 1920, Prohibition began. The Eighteenth Amendment went into effect. In its early days, Prohibition seemed to be helping society. Arrests for drunkenness and hospitalizations for alcohol-related issues declined. But the negatives began to outweigh the positives quite quickly.

Prohibition drove the consumption of alcohol underground. It was almost lawlessness. Speakeasies and gin joints catered to the upper class, who could afford the cost of illegal liquor. The working-class consumed homemade moonshine and bathtub gin, which was often made from poisonous additives to distill ingredients into alcohol. Legalized abstinence was a disaster. Prohibition was repealed in 1933 and most Americans breathed a sigh of relief at its end. Instead, alcohol was taxed to help get America out of the Depression.