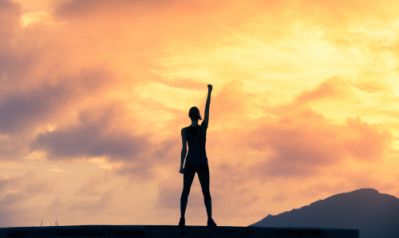 Nelson Mandela said, “I learned that courage was not the absence of fear, but the triumph over it. The brave man is not he who does not feel afraid, but he who conquers that fear.” Courage is often defined as bravery, such as standing up to someone or something stronger, but it can also refer to the ability to be strong and act correctly when faced with an opposition or personal loss.

Merriam-Webster lists the etymology for courage as coming from the Anglo-French word “curage,” which comes from the Latin for “heart.” Brene Brown calls courage “a heart word.” In her book, “I Thought It Was Just Me,” she writes, “In one of its earliest forms, the word courage meant ‘To speak one's mind by telling all one's heart.’” She calls it “ordinary courage.”

Maya Angelou and Winston Churchill each believed that courage was of the most important virtues, because it guarantees the other virtues. Courage is probably one of the more contentious virtues, because Saint Augustine did not believe courage was a virtue that Christians should have. Thomas Aquinas associated courage with mercy and charity. Courage only came through mercy and love. Aquinas also defined courage as endurance, instead of as bravery.

Since ancient times, lions have represented bravery and monarchy. Ancient cities of Mesopotamia would have lion sculptures at their gates to show strength. The Egyptian war goddess, Sekhmet, was often represented with a lioness head. Biblical accounts of lions represent the strength of men who “fought” against something or someone. For example, Samson kills a lion with his bare hands, and Daniel is thrown into the den of lions and comes out alive the next morning.

Richard I, the son of King Henry II of England, was known as Richard the Lionheart for his reputation as a great leader and warrior. Thirteen popes have taken the name of Leo, which is associated with lions. The mascots of the New York Public Library System are named Patience and Fortitude, and they are represented by lions.

“The Wizard of Oz” has to be one of the most popular and well-known films of the 20th century. Courage is often depicted as a lion in artwork, which makes it appropriate that the coward in the film is a lion. The Cowardly Lion simply doesn’t believe in himself. Still, by the end of the movie, he does act courageously by standing up to the palace guards of the Wicked Witch.

Most countries have awards for military courage and bravery in battle. The British Armed Forces has the Victoria Cross. In the United States, the highest military decoration is the Medal of Honor, and the second highest is the Distinguished Service Cross. Only one woman has been awarded the Army Medal of Honor. Her name was Mary Edwards Walker and she was a civilian Army surgeon during the Civil War who served meritoriously at the First Battle of Bull Run.

Meet Ivan Allen, Jr., the mayor of Atlanta, Georgia, from 1962 to 1970. He was the only white southern politician to testify before Congress on behalf of the Civil Rights Act of 1964. Allen lost friends and support for supporting desegregation. Death threats were made against him and his family for taking a stand against racism. On the other hand, he left a legacy of urban transformation and social justice. In 2010, Georgia Tech established the Ivan Allen Jr. Prize for Social Courage.