7 Reasons Boise Is a Great Place for a Religious Experience 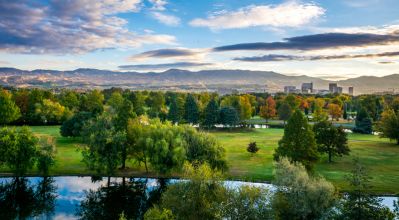 Boise, Idaho, also known as the “City of Trees,” was once a major stop on the Oregon Trail. The U.S. Army established a fort in the area in 1863 to protect settlers coming from the east into Oregon and Washington. It’s the capital of Idaho, and the third most populous area in the Pacific Northwest, after Seattle and Portland. Although it’s known for the Basque community, an annual jazz festival and a thriving arts community, it does feature some beautiful religious sites that have historical value as well as spiritual meaning.

This historic chapel, built in the Gothic Revival style, is one of the oldest church buildings in the state. It was formerly known as St. Michael’s Episcopal Church, constructed in 1866. At one time, it was a church and a school. The historic society restored the chapel in 1963 and moved it to the campus of Boise State University. Today, it is mostly used for weddings. It is listed on the National Register of Historic Places.

This building, constructed in 1896, is considered the oldest synagogue building in continuous use west of the Mississippi. The architecture blends two different styles, Rundbogenstil and Moorish Revival. It’s been moved from its original location. When the congregation moved the building, it found documentation that Marshall Field and Levi Strauss & Co. partially financed the construction. It is a stunning building.

This museum is housed in the historic St. Paul Baptist Church, which was the first African-American Baptist Church in the city. It was built in 1921, but seven years later the church needed structural improvements. Today, this building is listed on the National Register of Historic Place and has some wonderful exhibits about African-Americans in the community and from around the world. It’s located in Julia Davis Park, along with many other art and cultural exhibits in Boise.

Cathedral of the Rockies

This United Methodist congregation dates back to the 1872 gold rush in Idaho, but the building is much more current. It was consecrated in 1960. The architectural style is Gothic Revival, and the mosaic windows were artistically created to enrich the town and complement the backdrop of the mountains. The pipe organ housed in the cathedral is the largest in the Northwest.

Augustana Chapel is the original home of this church, which began with 19 Scandinavian immigrants in 1906. It has a cruciform plan, with an off-center tower in the Gothic style. It’s made of locally sourced sandstone and shingles. Today, it’s one of only two Gothic Revival churches of its era still standing and listed on the National Register of Historic Places.

This Romanesque Revival style cathedral was inspired by the Cathedral of Mainz in Germany and the Basilica of Saint-Sernin in Toulouse, France. It was constructed of Boise Sandstone. The cornerstone was laid in 1906, but it was built in stages. The cathedral was dedicated in 1921. Technically, it’s not really finished, as it was designed to have two towers with spires. The stained-glass windows depict saints and scenes from Christ’s life.

Although this historic mission is not in Boise proper, it’s an important part of the religious history of the area. A group of seven settlers were sent to the area by Brigham Young to preach to the faithful. It was named after King Limhi in the book of Mormon, and later changed to Fort Lemhi. The frontier was rough in 1855, but the settlers persevered for three years until they abandoned the site. Today, little remains of the original fort. If you visit, you can see why it was so difficult to make a home there.