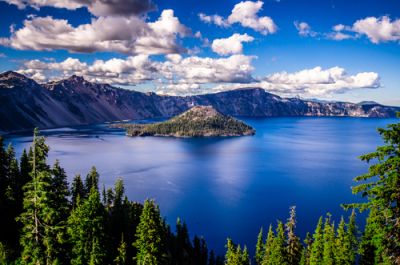 Saturday, April 20, kicks off National Park Week by waiving entrance fees to let anyone enjoy the scenery and beauty of their favorite park. Even though the week is half over, the themed days for the rest of the week look to be fun. On Sunday, US military and veterans are being recognized. Friday, April 26, is a day to celebrate friendships at the park. Bring out your canine buddy on Saturday to join the BARK rangers. The week wraps up with ParkRX Day, hoping people will take advantage of parks, trails and nature as a boost to their health.

When you’re making summer travel plans, think about traveling to one of these national parks with sacred spaces.

Crater Lake, the deepest lake in the United States, is considered the cleanest and clearest body of water in the world. This Oregon park features old-growth forests, wildlife and spectacular views. The Klamath Indians consider the lake sacred. Even today, many people come to the lake for spiritual pursuits. The park was established in 1902, but it is believed that the lake formed around 4680 BC by a volcanic eruption that was over 40 times more powerful than the blast in 1980 when Mt. St. Helens erupted.

Yellowstone was the first national park created by Congress in the United States. Wyoming was so remote at the time, the senators and representatives relied on eyewitness reports of the park’s beauty and attributes. No one could imagine 200-foot geysers that spouted out of the ground. It’s estimated that indigenous people have lived in Yellowstone for over 10,000 years. At least 26 tribes consider the park sacred. There are over 1,600 cultural sites within the park. The park is 7,500 feet above sea level, making it very cold until the summer months. The geothermal features are typically why people visit the park. The Crow call the park “land of the burning ground” and consider the geysers sacred water.

Lake Mead is home to the Hoover Dam, which is just one reason you should visit. The park is located in southern Nevada and northern Arizona. Grapevine Canyon and Spirit Mountain are sacred sites to the Yuman and Numic tribes of the area. Follow the trail into the canyon to see petroglyph panels considered to be some the oldest in the United States. The mountains are beautiful and home to desert bighorn sheep. It’s a landscape you’ll never forget.

Hawai’i might be too far to make a day trip, but you shouldn’t rule it out as a vacation spot. This park features an ancient trail with over 23,000 petroglyphs. Historians believe ancient travelers documented where they’d been. You can also take another trail that was once used to bring offerings to Pele, goddess of volcanoes. The park has amazing views of the area.

ACMNP: A Worship Experience in the Park

A Christian Ministry in the National Parks is an organization that offers Sunday services in the national parks through the summer. The schedules for each park are listed on their website (acmnp.com). Some parks have many services through the day, from sunrise to 30 minutes before sunset. If you are near a national park, take time to plan for a worship experience in a place that is unique.

“Take only memories, leave only footprints” is good advice when visiting precious eco-spaces. Enjoy the sights. Listen to plants and water. Enjoy the smells of nature. Treat nature with respect and don’t leave a mess. National parks in the United States are traditionally some of the most beautiful places in the world. Whatever spiritual philosophy you believe, experience the wonder of nature by visiting one this year.