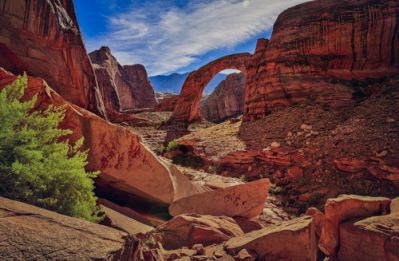 Arizona was the last of the contiguous states to join the Union. Statehood was achieved on Valentine’s Day, February 14, 1912. One quarter of the state is Indian reservations. The largest Native American tribe in Arizona is the Navajo Nation, but there are 26 other federally recognized tribes in the state. Although Arizona is certainly known for its ski resorts, the bigger attractions might be the national forests, parks, monuments and Grand Canyon National Park. Here are some of the can’t-miss sites in the state.

It’s believed that this is the only Catholic shrine in the United States that is dedicated to a sinner, rather than a saint. It remembers Juan Oliveras, a young man who became infatuated with his mother-in-law and proceeded to have an affair with her. Juan’s father-in-law caught him in the act and killed Juan with an ax. Juan’s mother-in-law committed suicide. The father-in-law fled the area to escape the marshals, but he was killed by Apache Indian raiders. Juan’s wife also killed herself. The Catholic Church refused to let Juan be buried in a church-owned cemetery. The site where he died became the site “El Tiradito,” which means “the little throwaway.” Visitors can light a candle and pray for Juan’s soul to be freed from purgatory.

The Navajo Nation and four other Native American nations consider this natural arch sacred. It has a span of about 234 feet, one of the largest natural arches in the world. The National Park Service maintains this space, which is both a religious and sacred place. Visitors are welcome to approach the bridge and walk under it but are asked to be respectful.

Our Lady of the Sierras Shrine, Hereford

When you’re driving on Arizona 92, you’ll be able to see the beautiful 75-foot Celtic Cross and 31-foot statue of the Virgin Mary. Stop in at the chapel to see the stunning architecture and craftsmanship. The chapel was constructed out of river rock local to the area. Although it is a newer chapel, just 20 years old, it still has a lot to offer. Take a spiritual journey up the mountainside through the Stations of the Cross. Admission is free. The shrine and prayer building are open from 9 a.m. to sunset.

Chapel of the Holy Dove, Flagstaff

Technically, this little chapel is about 16 miles north of Flagstaff in the middle of nowhere. If you’re taking U.S. Highway 180 to the Grand Canyon, you’ll want to make a little detour and stop at the chapel. It was constructed to show off the beauty of the San Francisco Peaks. It was destroyed by a fire in 1999 and rebuilt. Earlier this year, it was again threatened by a fire, but firefighters were able to prevent the chapel from being damaged.

Chapel of The Holy Cross, Sedona

Huffington Post calls this chapel the most spiritual place in Arizona. It does have the distinction of being the first contemporary Catholic Church structure. It’s built into the buttes and considered one of the Seven Man-Made Wonders of Arizona. It’s an inspiring building that required a special-use permit to construct in the Coconino National Forest. Although it looks immense, the chapel is actually quite small.

This mission is considered to be the oldest European structure in the state and the finest example of Spanish Colonial architecture in the United States. The site was established in 1692, but the current building wasn’t constructed until the 1790s. For a while, the Mexican government had jurisdiction over what would become Arizona. Spanish-born priests were banned. The church sat empty for many years. When Arizona was purchased by the US, the Santa Fe Diocese reopened the mission and paid for repairs. At the end of the 20th century, renovations were made to restore the mission to its historic glory.