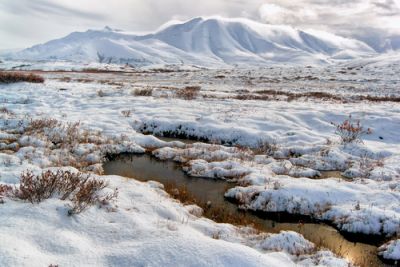 Alaska is the largest state in the Union, over twice the size of Texas. Both European and Russian settlers influenced the growth of religion in the state. Traditional life in Alaska was shaped more by the Alaska Native peoples. The culture of these indigenous peoples is alive and well-preserved.

The Gwich’in tribe calls this tundra “the sacred place where life begins.” Land and religion are inseparable to these people who still live on the ancestral lands. The caribou that live in the tundra are sacred to the tribe, but caribou are hunted by the members of the tribe. They consider it a ritual. This land is interconnected to their spirituality in a way that is rarely understood in Western culture. It’s almost thought that the land has a spirit of its own.

This cultural center bills itself as the place to “feel the heartbeat of Alaska’s indigenous people.” It offers classes, workshops and programming for children and adults about the cultures of Alaska. Native artists are celebrated through hands-on arts and crafts demonstrations and exhibits. Performances change each year to focus on different artists.

This Russian Orthodox Church began in 1894, not because of Russians living in the area, but because of the native Tlingit people. American missionaries who came to the area would not use native languages or customs, but the Eastern Orthodox Church in Sitka was much different. The chapel conducted services in the Tlingit language. The Tlingit leaders offered to donate land, labor and lumber for a church when they met with Russian Orthodox Bishop Nicholas.

Many of the artifacts and relics in the church were shipped from Russia and are still on display today.

The iconostasis, the wall that separates the nave from the sanctuary, was made in Russia, but the rest of the church was constructed from local resources. Some of the paintings that make up the iconostasis were a gift from Nicholas II, Russia’s last czar. This St. Nicholas church is considered to be the oldest, continual-use Orthodox church in southeast Alaska.

Not to be confused with Russian Orthodox St. Nicholas, this Byzantine Catholic Church celebrates the Eastern Catholic tradition. Many of the traditional icons and altars were crafted by Alaskan artists. Nature is reflected in many of the frames around the paintings.

This shrine is dedicated to Saint Thérèse of Lisieux, a young woman who served as a nun in France in the late 19th century. She is often called “The Little Flower.” She only served as a nun for nine years. At the time of her death, she was 24 years old. In 1925, just 28 years after she died, Pope Pius XI canonized her. However, she was chosen to protect the mission in 1919, before she was even beatified. It was a bold move by Alaska’s first bishop, Jesuit missionary Father Joseph Crimont who chose her. He wanted to honor the nun, even though she had never seen the land. She would later be designated as the patron saint of Alaska.

The shrine was built in the late 1930s, with the blessing of Bishop Crimont. The building was constructed of beach-stone, local to the area. Visitors can walk through a devotional structure with “Stations of the Cross,” where each station depicts a scene from the week of Jesus Christ’s death and resurrection. The Good Shepard Rosary Trail is a handicapped-accessible path next to the shrine, designed to give visitors a place to enjoy nature and meditate. At the end of the trail, you’ll see a replica of “The Pieta.” One of the newest features at the shrine is the Merciful Love Labyrinth. The entire place is a beautiful refuge.