At the age of just 21 months, Kanon Tipton of Grenada, MS spoke the word of God in front of his father's Pentecostal congregation, or at least according to many of those who were in attendance. Now a preschooler, Tipton occasionally "preaches" in front of the same congregation with public speaking skills akin to those of a seasoned televangelist. These skills have been coached into him thanks to the influence of his father and grandfather, who are also pentecostal pastors. 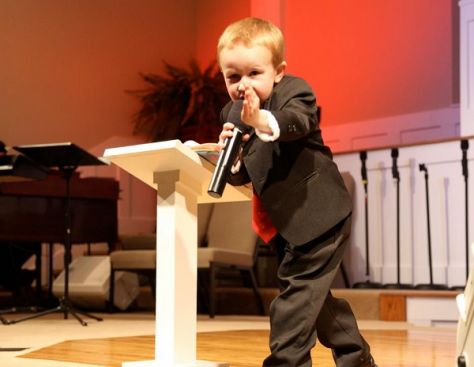 Tipton enthusiastically preaches about the "Holy Ghost" and a "red revival" while his father's congregation eagerly laps up his every word.

Tipton represents a growing wave of child evangelists who are rapidly rising in popularity throughout the world. Other popular pint-sized preachers include Brazilian 12-year old Matheus Moraes, a so-called "Rock Star from Heaven," who, after becoming a preacher at the age of six, now makesÂ hundreds of speaking appearances a year and has ludicrous ventures in CD and DVD sales.

So, while many see young preachers like Tipton as delightfully-entertaining mouthpieces of the word of God or heaven-sent saviors meant to help those gone astray, others see them as the product of misguided stage parents who push their children to fame and fortune. Child preacher naysayers point to the criminal history of fraud held by the grandmother of Terry Durham, a 12-year old "spiritual healer" who at the age of six went on record for being the youngest ordained minister in the world, to question their legitimacy.

The stories of Tipton and Moraes, and other child evangelists like them, are the subject of the National Geographic Channel's new special "Pint-Sized Preachers", which will premier on Wednesday, August 17 and 10 PM ET/PT.

What can ULC ministers take away from pint-sized preaching? While our online ministry is much different than the evangelist and pentecostal preaching shown in the above videos, there are some valuable conclusions the ULC's online-ordained ministers can learn from Tipton and Moraes.

The first is that age is no obstacle for those with the desire to become a priest, become a preacher or become a minister. While boys like Tipton have strong family backgrounds in preaching which undoubtedly assist them in their endeavors, the eager ways in which the faithful respond to the child ministers demonstrates that anyone with passionate spiritual beliefs can share them in a meaningful way in front of a conregation. Our ministers should not wrongly assume that those with similar spiritual beliefs will not want to hear there words - if Tipton and Moraes can do it, you can too!

The second conclusion is that God (however you conceive him) can be found in everyone, even those who have not attended years of formal religious training. While Tipton may not know the ins and outs of the Bible, complex Christian theology, or even how to tie his shoes, he clearly knows how to captivate a congregation with the "words of God" he speaks. If Tipton's father's congregation finds religious value in him, someone with the same passion who became legally ordained online has just as great a right to stand in front of the same group of faithful followers. Our online-ordained ministers should keep this in mind if they encounter doubt about the validity of the ULC ordination.