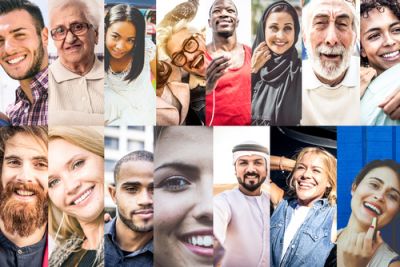 Religious denominations are just one way that Americans classify themselves. The differences between denominations might be huge. It’s hard to imagine Muslims finding much common ground with Catholics when you look just at the denominational tenets. On the other hand, the Episcopal faith is commonly known as Catholic-lite, because there are so many commonalities within the canon of faith.

Pew Research often sorts people by denominations in their surveys. But a recent analysis of religion in America looks at the same behaviors and beliefs across denominations. Instead of sorting people based on what they believe, the researchers looked at factors that transcended religious doctrine. Americans were sorted into groups based on traits such as how active they are in faith, the value of religion in their lives and where people found meaning and fulfillment. This led to seven groups or typologies.

Pew Research categorized Americans in seven types, from the most religious to least religious:

Researchers did not take into account political measures when creating the different types, but the groups do seem to line up by politics. Republicans make up the majority of the first two types, while Democrats comprise the majority of the least religious groups, the Religion Resisters and Solidly Secular.

The most religious Americans, no matter what their faith, find religion to be a driving force in their day-to-day lives. It doesn’t matter whether the believer is Christian or Muslim, the sacred text of the religion is vital to their faith. Sunday Stalwarts are more likely to vote in elections and to be active in the community through volunteerism.

On the opposite end of the spectrum, the least religious groups are typically younger and more educated than other groups. The Solidly Secular and Religion Resisters are more likely to believe that humans are causing global warming.

What Can We Learn?

This research is interesting because it looks at behaviors that are similar, rather than looking at tenets of faith. It’s easy to assume that just because someone attends a Catholic church, they automatically buy into every aspect of the Catholic doctrine. Pew Research places people together based on how religion fits into their life.

Pew Research continues to help Americans understand their similarities and differences, which makes it easier to form connections. As the United States seems to become more polarized by politics, it’s important to look at what connects us.