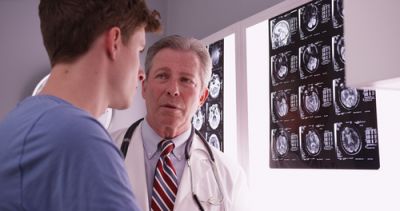 A new study published last month in Neuropsychologia links Christian fundamentalist beliefs to damage in the prefrontal cortex of people who adhere to this belief system. Jordan Grafinan of Northwestern University and a team of researchers studied 149 Vietnam War veterans, 119 of them with brain trauma and 30 of them healthy with no brain damage. While the majority of them self-identified as Christians, nearly a third, 32.5% to be exact, did not specify a particular religion.

As researchers had predicted, the participants with damage to their vmPFC and dlPFC rated much higher in fundamentalist tendencies than did those with no prefrontal cortex damage. For instance, they rated radical political statements considerably more moderately than their nondamaged co-participants did.

The importance of this study’s findings rests on its suggestion that impaired functioning in the prefrontal cortex can make an individual susceptible to religious fundamentalism. Such damage can be caused by many things including the following:

Many people confuse the terms “fundamentalism” and “evangelicalism.” In general, both groups believe in the following religious doctrines:

Fundamentalists, however, tend to form a subset of evangelicals. They have and maintain very conservative political views. Evangelicals, on the other hand, hold a wide variety of political views ranging from right-wing conservatism to middle-of-the-road liberalism.

According to the Pew Research Center, evangelicals make up at least 25% of the adult US population. Others estimate their numbers to be more like 40%. With regard to extreme fundamentalists who agitate politically and otherwise, such as the Westboro Baptist Church, then the numbers decrease dramatically to a very tiny minority of the population.

The rise of fundamentalism in the US began in the early 20th century. By the 1950s, most fundamentalists had become separatists who had withdrawn from the more liberal mainline Christian denominations and had started their own day schools, colleges, and seminaries.

In order to appeal to a wider population base, evangelists such as Billy Graham coined the term “new evangelical” and became more involved in politics. In fact, Rev. Graham, who died last year, became known as “America’s pastor.” Not only did he conduct religious crusades throughout the country that thousands of people attended, he also served as counselor and confidant to every US president from Harry Truman to Barack Obama. When the country suffered a national tragedy, such as the Oklahoma City bombing in 1995 and the horrendous terrorist attacks of 9/11, national leaders called upon Graham to give solace to our grieving nation.

Jerry Falwell was another well-known pastor associated with fundamentalism. His Moral Majority, which he established in 1979, became a major political force throughout the 1980s, significantly impacting the elections of Ronald Reagan in 1980 and 1984 and the election of George H. W. Bush in 1988.

Over the years, the line between fundamentalism and evangelicalism has blurred as both groups have sought to spread their conservative views and get them incorporated into the Republican Party platform, as well as into American politics in general.

As for this study linking fundamentalism to brain damage, researchers admit that cognitive flexibility and open-mindedness represent only two factors linked to fundamental beliefs. Identifying the other factors, such as genetic predispositions or social influences, will require further studies.

Well... That's their opinion and they have their right to it. I, on the other hand, understand that the horrors of war really have a way of toughening up one's belief system or crushes it. So, that's bad, huh? Like I heard a man once say, "You can surely build a beautiful house without a foundation. Just better hope the land doesn't shake...