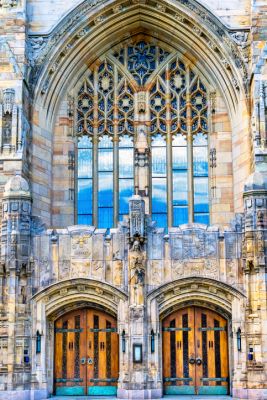 New Haven, CT, is home to Yale University, but the city has a much deeper heritage than most people realize. It was founded in 1638 by the English Puritans and is considered the first planned city in the United States. Before the Europeans arrived, it was home to the Quinnipiac tribe. The Dutch traded in the area, but never settled permanently. The Puritan settlement became the New Haven Colony. One of its early rules was that no other churches could be established in the area. That changed when New Haven Colony became part of the Connecticut Colony.

New Haven played an important role in the early days of the United States. Although it’s difficult to do justice to the city’s place in history, here are a few of the most historic religious sites in New Haven.

Center Church on the Green

This church was organized in 1639 by the Puritans who founded New Haven. The current meeting house was built in the Federal style during the War of 1812. The exterior features traditional red brick and a tall spire that can be seen for miles. The interior boasts a Tiffany stained-glass window and Waterford crystal chandelier. Under the main floor of the church is the ancient cemetery with gravestones dating from 1687. Sadly, the headstones are deteriorating. The church is trying to take action to preserve this piece of history.

Trinity Church on the Green

This Episcopal church has had a presence in New Haven since 1705. This historic building was built at the same time as Center Church on the Green, supervised by the same architect. Trinity was built in the Gothic style, the first one of its kind in North America. It sparked the Gothic architecture movement. The stained-glass windows are exquisite. Notice the different styles, because the windows were made by different artists.

United Church on the Green

This church was also built during the War of 1812. The lumber for the building might have been held up in the harbor by a British blockade, but the commander of the squadron allowed the shipment to pass when he learned that it was intended for the church. The building is one of the finest examples of Federal style architecture. Although this building does not have the ornate interior that other churches feature, its structure is highly symbolic. The large glass windows encourage members to be appreciative of creation. City sounds can be heard during worship, which remind the congregation that they are in the world, not in a sanctuary.

The Knights of Columbus are a Catholic fraternal organization that supports church communities through charitable and philanthropic efforts. This museum not only focuses on the history of the Knights of Columbus through a permanent exhibit of its founder, the Venerable Father Michael McGivney, but also through a Papal Gallery with artifacts from the Vatican. One of its current exhibits is a tribute to World War I, providing a historical retrospective of the war that affected so many people around the world. Another special exhibit includes tiles that Christopher Columbus brought to America in 1493.

As one of the oldest institutions of higher education in the United States, Yale University has a prestigious list of alumni that includes 60 Nobel laureates, 5 U.S. presidents and 19 U.S. Supreme Court Justices. Originally, its charter was limited to theology and sacred languages, but the curriculum expanded to include science and humanities. A number of architectural styles can be observed on campus, including Greek Ionic, Colonial, Victorian, Beaux-Arts and modern. Although it may not be a traditionally religious church, its ties to the religious heritage of New Haven make it a site that should be remembered.