Must You Be Religious in Order To Be Ethical? 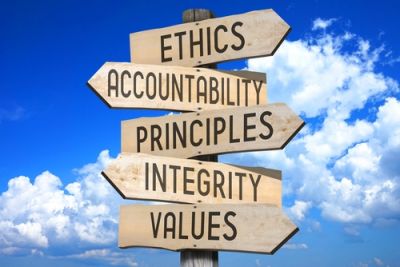 Probably the best-known expression of ethics and morality is the golden rule: “Do unto others as you would have others do unto you.” Virtually all of the world’s religions adhere to this extremely broad ethical “rule,” expressing it in a variety of ways, such as the following:

Secular ethicists, on the other hand, argue that ethics represents a subset of philosophy, one that deals with such things as right, good, duty, etc. The ancient Greek philosophers Plato and Aristotle discussed these subjects back in the third and fourth centuries BCE. A central tenet of secular ethics is that of “the good life,” i.e., a life that is satisfying and worth living. Ancient Greeks called this endaimonia, or happiness, and to them, finding this happiness required one to live a virtuous life, one that encompassed things like good personal habits, courage, temperance, friendship, justice, and intellectual honesty. In other words, virtue, and therefore ethics, applied to the whole person and was accomplished by means of integrity. It had nothing to do with religious beliefs.

Religion as an Ethics Source

Many people, even confirmed atheists, agree that at a minimum, religion can serve as a good source for defining one’s ethical and moral code. Immanuel Kant, an influential German philosopher of the 18th century, took this idea one step further. He held that ethics requires a god, however one might define that god. His reasoning went something like this:

The Age of Enlightenment, sometimes called the Age of Reason, lasted from about 1650 to about 1799. The hallmark of Enlightenment thinking was a paradigm shift away from the religion-centric mysticism and authoritarianism of the feudal period to a more rational way of thinking and operating. Originating in Europe, the Enlightenment greatly influenced modern ethical and political thought in America, and is given credit for our foundational documents, the Declaration of Independence and the Constitution, as well as our all-important Bill of Rights.

Undoubtedly the religious versus secular ethics debate will continue for centuries to come. Regardless of whether or not you see yourself as a religious person, and if so, which religion you adhere to, you surely do see yourself as an ethical person. After all, no one except sociopaths gets up in the morning and says to themselves, “Today I will do something bad.”