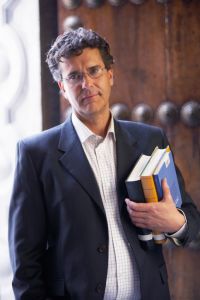 An educator wonders whether his students may need more practice engaging in religious discussion in public. Students in his humanities class are eager to engage in topics ranging from identity to sexuality, to discuss notions of art and obscenity, or to talk about violence throughout history in revolutions; but the students fade to silence when the question turns to matters of faith.

Works Not Made in a Vacuum

The teacher notes that great works of philosophy and literature that the class reads and discusses come from authors who were engaging the audiences of their times with topics of relevance. To leave out the questions of faith that they grappled with is to fail to enter fully into the debate with those authors and to deeply appreciate their efforts to communicate.

The educator seeks to lead students into engaging with the texts by asking:

Not all questions are answered, but the issues are worth pursuing in the pursuit of knowledge.

A Commandment to Wrestle With the Texts

Following the death of his father, the educator faced his own history as a secular Jew as he looked for a place to say the traditional memorial prayer, the Kaddish. In Jewish tradition, the prayer is not to be offered alone there is to be a group of at least 10 praying together. He found himself participating not just in the memorial prayer, but also in the study sessions as well. Why is this atheist praying and studying the Torah, he wondered. He satisfied himself with the response that it was about his participation.

The study group opens with an invocation that is a blessing, and it also echoes a directive to engage with the scriptural passages. Rather than to merely memorize or obey, the command is to wrestle with their meaning. The teacher wants his students to take on this challenge, to "wrestle with basic questions of love and judgment, justice and violence, grace and forgiveness."

The teacher does not need to know the individual faith of each of his students, and he is not trying to turn them into believers by any means. He hopes, though, to have them leave his class with a deeper appreciation and comprehension for how notions of politics, knowledge, ethics and more are spun together into the great works they read.

While science and technology have progressed wildly since the time of most of the authors that are studied in the humanities class, all the questions are still not answered. As a teacher, he wants to show students that, in truth, the great questions that the philosophers and authors of past centuries have wrestled with remain unresolved.

Connections Reaching Across Time and Around the World

All humans are born onto this planet to learn. From experiences that life delivers as each one grows, to books and lectures and scriptures, lessons surround every person throughout life. Many students of college age in the modern scientific era perceive that most of the fundamental questions of the world have been answered, whether by probes in deep space or in superconducting supercolliders that measure infinitely small particles. From miracles of modern medicine to the wonders of computing that people carry in their pockets, it is easy to think that modern society has it all figured out.

As an educator in the college classroom, the effort is not directed at arriving at a definitive and complete set of answers about the past or on philosophical topics. The purpose is to exercise intellect and imagination while taking on subjects that challenge people to know all that is really worth knowing. The questions in the texts of the past are to be wrestled with, not just memorized and followed.