Meet Samson, Hercules of the Bible 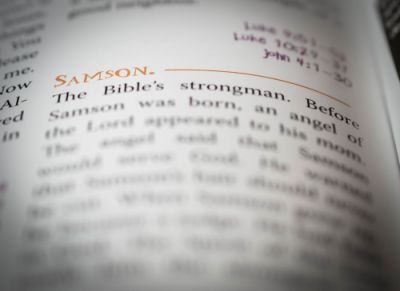 Strong men and women are the backbone of the Marvel Universe and DC Comics. Wonder Woman, Superman, Wolverine and the Hulk are characters that have pulled even the non-comic book fans to their movies in record numbers. But Marvel and DC didn’t invent these heroes; they built on the popularity of titans from history. Greek mythology gave us Atlas, the man who was condemned to hold up the celestial spheres. His Roman counterpart is Hercules, famous for his strength.

The Bible gave us Samson. His story is told in the Book of Judges, chapters 13–16. Samson’s mother’s name is never mentioned, but an angel of the Lord appeared to her to give her news that she would become pregnant. Samson’s parents did not have children. His mother was considered barren, so he was a surprise.

The angel told Samson’s mother that she was not to drink alcohol, nor should she allow the child to shave or cut his hair. This child was to be a Nazirite of God, a person consecrated to the Lord. Normally, a Nazarite made this vow only for a short time frame. Samson was to be a Nazirite from before his birth to the day he died.

Samson as an Adult

The Bible does not say much about Samson’s childhood, except that “he grew and the Lord blessed him.” Judges 14 opens with Samson wanting to marry a Philistine woman. The Israelites were forbidden to marry gentiles. His parents objected, but Samson chose her anyway. According to Judges 14:4, this was a mandate from the Lord to allow Israel to confront the Philistines.

Samson was given great strength by the Lord. When Samson was attacked by a lion, he tore it apart as if it were a baby goat. After Samson is duped by his father-in-law, he gathered 300 foxes and tied pairs of them together by their tails with a burning torch attached to the tail. The foxes destroyed the grain fields and olive groves. The Philistines burned Samson’s wife and father-in-law. The Israelites turned Samson over to the Philistines, but Samson grabbed a jawbone of a donkey and killed 1,000 men with it.

Following this incident, Samson led Israel for 20 years as a judge.

Samson’s claim to fame is usually his relationship with Delilah, but in the Bible, it only takes up about 17 verses. Samson fell in love with Delilah. Unknown to Samson, Delilah is approached by the leaders of the Philistines to betray Samson and to find out the secret of his strength.

Delilah asked Samson for his secret. He lied to her the first and second times she asked, but on the third attempt he gave in and told her the truth. If his hair is cut, he loses his strength. Delilah has a servant cut Samson’s hair. The Philistines captured Samson and gouged his eyes to make him blind. They imprisoned Samson and made him grind grain in prison.

Samson Gets Revenge in Death

The Philistines brought Samson to Gaza during a religious sacrifice. It was likely a celebration that Samson had been delivered to the Philistines and there was a large crowd gathered at the temple. Samson asked his captors to let him lean against the pillars to rest. Samson prayed for strength from the Lord to break the pillars. He killed himself, but he took down all the rulers and people in the temple. Judges 16:30 says, “Thus he killed many more when he died than while he lived.”

Samson is often portrayed as a hero, but many of his actions noted in his story are that of a vigilante rather than a leader. Even so, he is one of the most important heroes of the Old Testament.