Hymns for the LGBTQ+ Community 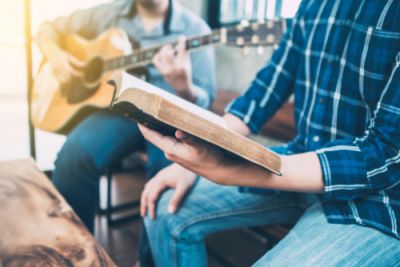 The classic hymns are controversial in many ways. Modern Christians often don’t like to think about the traditional warfare of the past. A lot of hymns are extremely patriarchal, and some hymns refer to handicaps in ways that aren’t appropriate today. Fortunately, changes have been made to the traditional canon of music. The Christmas carol “Hark! The Herald Angels Sing” used to have the words “born that man no more may die” in stanza three. Today, most versions sing “born that we no more may die.”

There’s been an increase in awareness of inclusive language in the church. It’s not just a male-female issue, but sexuality. Hymns need to be free of divisive elements that are universal. There are times when it’s difficult to change context, but we should be looking at what is being sung in churches. Sensitivity to people of all ages, shapes, sexuality and gender is important to have a healthy worship session. Diversity should be celebrated in faith communities, but it often isn’t.

Earlier this year, the Hymn Society in the United States and Canada released a collection of hymns titled “Songs for the Holy Other: Hymns Affirming the LGBTQIA2S+ Community.” Congregations can download the collection to use for free for 60 days. After 60 days, a license must be purchased from the copyright holders or Christian Copyright Licensing International (CCLI).

Each of the hymns were written by members or allies of the LGBT+ community. According the Society’s website, “the collection emerged from a desire to make queer hymns … accessible to a wider range of congregations.” There should be even more resources to come in the future as the Hymn Society builds a library of music that represents people of the LGBT+ community.

The collection includes music that honors LGBTQ victims of violence, such as the song “For Those Who Suffered.” The song remembers people who suffered in silent shame, those who found no peace in worship pews, and those who slumbered under alley lights. Then it goes on to ask the Lord to “wipe up their tears,” “make them your saints,” and grant them eternal joy, peace and life.

One song, “The Dove Will Fly on Mended Wing,” celebrates a diverse church in which the “chains will fall” and “justice will roll.” It’s about a renewed hope in humankind as people find acceptance in the church. It’s a hymn of affirmation for the church.

The chorus from “We Are a Rainbow” draws on the rainbow imagery from the Bible. Ministries that affirm those of every sexual orientation and gender can shine a rainbow across the world that encourages other congregations to be open to everyone:

“We are a rainbow, sign of covenant and peace,
For the flood of tears will finally cease to be,
Come shine your rainbow, splash your hues across the sky,
Paint the world in colors proud and bold and free.”

These words reference Genesis, when Noah is given a covenant from God after the flood. The second line refers to Psalm 30:5b, “weeping may linger for the night, but joy comes with the morning.” The final lines can be traced to Matthew 5:14-15, when Jesus is saying “you are the light of the world.”

Hymns cannot remain static. There are always going to be the people who demand that music doesn’t change. Some will never see a reason to change hymns that are offensive to some members of the church. It’s okay to hear their concerns, but it’s also okay to move on. The King James Bible was translated over 400 years ago, during a different time and culture. Today, many people use a more modern version without any drastic consequences. We can do the same with hymns. Check out these affirming hymns that celebrate diversity and have inclusive language.

'burned it': You gotta be kidding me! Gospel music not effective for the homeless? Says who? Gospel music speaks to the heart, no matter what the circumstances! Pull your head out!