How To Write a Quick Wedding Ceremony Script 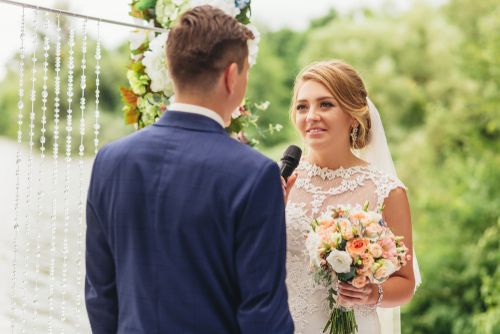 Have you ever been to a wedding where the ceremony seems to last forever? While celebrating the union of a couple is a very common occurrence, most people are looking forward to the excitement that takes place after the ceremony comes to a close. To keep things moving and get the crowd to the fun part, you need to think about length. A quick wedding ceremony can still hit all of the important points without feeling like it is taking an eternity. Review these suggestions to learn how to complete this task with ease.

The Type of Ceremony

Before you can increase the speed of your ceremony, you first need to think about the type of event you’re hosting. Will this be a secular gathering, or are you tying the knot under the guidance of a religious representative? This matters because every group has different requirements for what must be included in the ceremony. Secular events tend to offer more flexibility, while religious ceremonies often require the couple go through several key rituals to be considered officially wed.

The General Order of Events

Though there are differences between secular and religious weddings, there is still a general order of events you can consider when writing your quick wedding ceremony script. Typically, there is a procession where the couple and the party enter the venue after all guests have arrived. After this, the officiant delivers some words to the crowd and there are scattered readings and songs. At a certain point, the officiant addresses the couple and, if allowed, offers them the opportunity to speak their personalized vows to each other.

After the vows, the officiant will say a few more words and declare the union official. Usually, this is the final step that leads to the couple leaving the venue and ushering in the reception portion of the event. While this is far from the only way the event can play out, using this order as a general guideline will help you gain some perspective.

For a short wedding ceremony to work, focus on the length of each portion of the event. The readings, for example, don’t need to be long. Select the shortest and most poignant passages to capture the right energy without forcing the guests to sit through a long-winded speech. Similarly, your vows should be simple and quick. While there is no rule saying you need to make your exchange short, guests only have so much attention to spare. The longer you go on, the more likely people will start to zone out.

However, be sure not to rush through things to keep your event moving. If you’re stressed about time and keep pushing for participants to speed things along, you might find that your wedding is a jumbled mess of hurried words and flurried movement. Plus, this is also a way to encourage an accident. A bridesmaid who feels like she needs to move quickly down the aisle might find herself losing her footing and landing on her face. A short wedding ceremony doesn’t have to be on maximum speed for it to be quick.

A good way to frame the entire experience of creating a short wedding ceremony script is by thinking about what is most important to you. If you’re not invested in the idea of readings, then most ceremonies allow for these to be cut. When you want to put more emphasis on the vows, keep everything else short and allow a bit more time for the exchange.

A quick wedding ceremony can be advantageous for a number of reasons. As long as you put thought behind the changes you make to the flow and avoid rushing the experience, you should have no difficulty finding a rhythm that works for you.

Category: Weddings Be a Minister