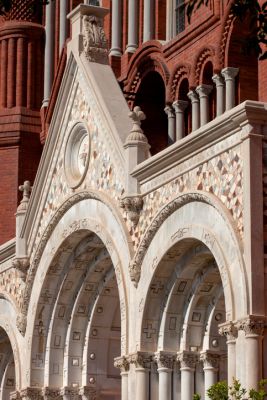 In the golf world, Augusta is a capital. Although the city served as the second state capital of Georgia for a short time in the late 18th century, it’s more well-known for hosting The US Masters. James Oglethorpe named the city after Princess Augusta, mother of King George III. Oglethorpe was a social reformer who hoped to resettle Britain’s worthy poor in the New World. Originally, slavery was banned in the Georgia colony. Cotton plantations demanded a larger work force. When Oglethorpe left the colony in 1743 the ban was lifted, providing economic growth for the colony at the expense of thousands of slaves who were brought into the colony.

Augusta was never burned to the ground during the Civil War like Atlanta, but the threat was real. The town sent over 2,000 of its citizens to fight in the war. Even though African American civil rights were expanded following the war, Georgia was able to enact Jim Crow laws. It would take another 100 years before these restrictions were lifted. Today, even though slavery is in the past, race relations are still a contentious issue. You don’t have to golf to appreciate the religious heritage in Augusta and how it shapes today’s climate.

The issue of slavery not only split the nation, it divided houses of worship. The Baptists were no different. Although the national debate was the main issue, the secondary problem was that the American Baptist Home Mission Society did not appoint many southern missionaries. The Georgia Baptists recommended a slaveholder as a missionary, but the Society refused his appointment, stating that they could not appear to endorse slavery. Southerners believed that northern Baptists were infringing on their fundamental rights.

Delegates from Baptist congregations throughout the South met at the historic First Baptist Church in Augusta on Greene Street in 1845. The Southern Baptist Convention was formed. The building where the meeting was held is a beautiful example of Beaux Arts Classicism. Sadly, its not open to the public, but the exterior is worth a look. The portico features six Corinthian columns. There is a historic marker that commemorates the significant event in the church’s history. The most-attended denomination in Augusta is the Southern Baptist Convention. The First Baptist Church meets at a different location, but still has an active congregation.

This church was established in 1750 by the Church of England. It was named after St. Paul’s Cathedral in London. When the Church of England in America became the Episcopal Church, this congregation became part of the Episcopal movement. The current building was constructed in 1919 following the Great Fire of 1916, which destroyed much of the city. The church is a vital part of the community today.

The original baptismal font, brought from England in 1751, was saved and is now located in the narthex of the church. In the churchyard, visitors can see the grave marker from Col. William Few, who signed the US Constitution. Make sure to walk around the grounds to see the Celtic cross that marks the historic location of Fort Augusta.

Catholicism was banned in early colonial Georgia, but the religion would find acceptance following the American Revolution. This parish owes it heritage to Irish immigrants who settled in Georgia in 1874 after the Great Famine in Ireland. The building where worship is held is one of the finest examples of Victorian Romanesque architecture in Georgia. Look carefully to find 15 different styles of brickwork. The stained-glass windows were imported from Germany. The towering twin spires are indicative of that style. Construction began in 1898 and finished in 1900. It held its last mass in 1971 but has since been restored as a historic building. Today, it’s available for tours and community events that promote cultural activities.