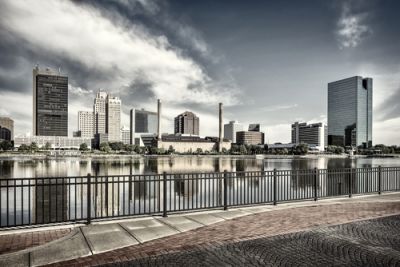 Located in northwest Ohio, Toledo sits on the western end of Lake Erie, making it a transportation hub. After the canals were finished in 1845, giving ships access to the town, Toledo quickly grew into a major community. Its nickname is “The Glass City” because it was once the glass capital of the world. Toledo is home to many glass manufacturers, including Owens Corning and Glass Fibers Inc. Researchers and scientists from Toledo were innovators in the glass business, from manufacturing to art.

While not exactly a church, this museum has been named the best attraction in the state. It houses one of the best glass collections in the world. Admission is free to the public, but you do pay a fee to park. Earlier this year, the museum hosted an exhibit titled, “Glorious Splendor: Treasures of Early Christian Art,” and it included 30 artifacts made of metal, stone, gold and silver that illustrate the shift from paganism to Christianity in the third century A.D. The museum houses a collection of more than 30,000 objects demonstrating art and culture from around the world.

This church was founded in 1833 and is thought to be the oldest congregation organized in Toledo. The building features rounded pediments and a tile roof that reflected Spanish influences. The church building was constructed in 1916 next to the original church. Tragically, in 1927, a gas explosion at the church killed three caretakers and destroyed the old church. One of the treasures that was preserved was a collection of eight Tiffany windows.

The Historic Church of St. Patrick

This church reaches back to 1862. Father Edward Hannin, a young priest of 36 years, was assigned to organize a parish for the Irish Catholic population who were constructing the Miami and Erie Canal. Laborers were uninterested in faith and churches. Father Hannin had his work cut out for him, but it only took him a year to dedicate the church building. But it was built in haste. In just 29 years, the building became unsafe.

In 1892, the foundation for the second building was laid. The church took eight years to complete. Architecturally, the style is pure Gothic. The original spire was 240 feet high. (It was damaged in 1980 by lightning.) The stained-glass windows are breathtaking. One is a larger-than-life figure of King David playing the harp.

Our Lady, Queen of the Most Holy Rosary Cathedral

This church sits in Toledo’s Historic Old West End. Its architecture is Spanish Platteresque style, a highly decorative style in the manner of silversmiths. Although plans were designed for the building in 1912, the cornerstone wasn’t laid until 1926. The cathedral would be dedicated in October 1940. It’s a stunning building that is the mother church for 124 parishes in its diocese.

This Gothic Revival style church was built in 1863. Although the sanctuary has been modernized, the exterior of the building still has the 19th-century look. This Episcopal Church has served the community for generations and partners with many local organizations to continue its mission.

This Catholic Church was started in 1898 for Hungarian Catholic immigrants. The third building and present church was built in 1914 in the Byzantine style. It’s now part of the Epiphany of the Lord Parish, which includes five other historic churches in the area that have served the Catholic and local community for over 150 years.