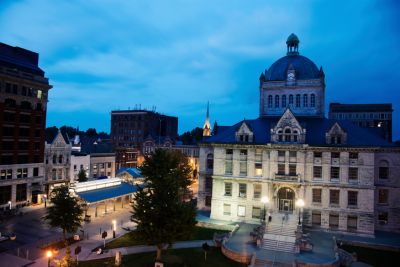 There are 19 towns in the United States named Lexington. Many are named after the historic Massachusetts town, where the first shots of the Revolutionary War were fired. The town in Kentucky holds the honor of being the first of many places to be the namesake of the Massachusetts location. In 1850, one-fifth of Kentucky’s population were slaves, with the highest concentration in Lexington. But there were also many free blacks in the state, too.

During the Civil War, Kentucky remained neutral, hoping to bring the two sides together and avoid the horrors of war. Abraham Lincoln’s wife’s family were residents of Louisville. The Todds were split by the war. Eight of Mary Todd Lincoln’s siblings fought for the Confederacy, while she and five of her siblings chose the Union side. Many other Lexington families were divided during the war. Although the Confederates claimed Lexington at the beginning of the war, the Union forces captured the town and made it a stronghold.

Understanding Kentucky’s stance, as a state literally and figuratively caught between the North and South during the Civil War, can help you understand the importance of religion to the people of Kentucky.

Lexington was chartered in 1782. Just a few years later, Peter Durrett, a slave, gathered a group of congregants together and formed the First African Church. This congregation is the oldest black church in Kentucky. The building that was constructed in 1856 was built in the Italianate style. It’s no longer in use, but it is on the National Register of Historic Places. The church has gone through many affiliations, but it still is in existence today worshipping at a newer church.

This church is significant due to its architectural style, Richardsonian Romanesque. It has characteristics of 11th and 12th century styles of architecture from France, Spain and Italy. It’s extremely picturesque from the outside, with shorter columns and towers than traditional cathedrals. It was built in 1894, but the congregation has a 200-year history in Lexington and thrives today.

This church is one of the oldest in Lexington, dating to 1784. The Gothic Revival style building was not constructed until 1872, when Gothic architecture was the norm in churches. Its spire stands 180-feet, allowing it to be seen for miles. A Tiffany stained glass that depicts Christ at Gethsemane was added sometime in the late 1880s or 1890s. For many years, the Presbyterian churches in town were split over the slavery issue. It’s a sad commentary on the church.

This church is a simple one-room log cabin meeting house. In 1801, it’s estimated that about 25,000 people of all ages, socioeconomic levels and cultures gathered here for what is called the “Western Great Revival.” A limestone shrine was built around the cabin to protect it from “weather, vermin and woodpeckers.” It is still a place of worship.

This landmark is the largest restored Shaker Village in the United States. The Society of Believers who created this community had wanted to create a haven where people were committed to pacifism, equality, shared labor and celibacy. At its height, the population of Pleasant Hill was about 500. Sadly, the last Shakers moved away in the 1920s. Today, the village offers a museum, exhibits and events that exemplify the Shaker lifestyle and different aspects of life as it was in the 19th century.

As the only school approved by the Salvation Army to educate its leaders, this Methodist University holds a special place in the area. In 1970, the school was the site of another revival, a week-long worship experience that spurred other revivals across the United States. It’s worth a walk-through to examine the architecture on campus.