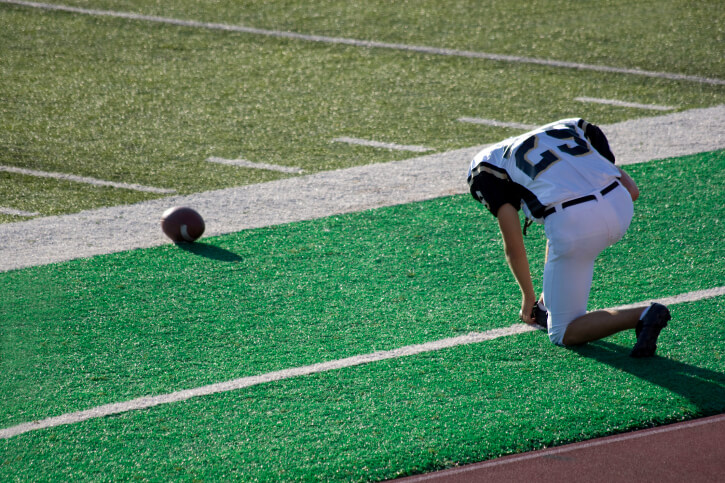 Joe Kennedy is the assistant head football coach at Bremerton High School in Bremerton, Washington. For years, he has had the tradition of heading to the 50-yard-line after every football game and praying. He says he thanks God for all of the players that played in the game, on both his team and the opponent's team. This tradition has lasted for nine years, but suddenly it is under scrutiny. Now, the football coach will instead be allowed to give post game motivational speeches, but they cannot have any sort of religious tone to them.

Players Not Being Coerced to Pray

Kennedy's post game ritual is not something he asks other players to be involved in. He doesn't say anything about what he is planning to do, it is just something others have observed and decided to take part in. On some weeks, it's just him out there, and other weeks, players from both teams choose to participate. No one is ever told that they won't get playing time if they don't pray and the ones who do pray don't get any special treatment. He has said that there is no pressure for anyone to join him, but it is just something he likes to do.

Prayers on the Football Field

Kennedy certainly isn't the first person to have a prayer on the football field at the beginning or end of a game. In the NFL, it isn't uncommon at all to see players from both teams meet in the middle of the field at the end of the game and pray together. There's never an issue with anyone because nobody is forced to participate. However, some have pointed out there is a difference between a player-led prayer in a professional football league and a prayer led by a high school football coach while his students are around. Still, they aren't too different because in both cases, it has nothing to do with how much a player will be allowed to play in a game or how they will be treated.

Teachers and other faculty members cannot encourage or discourage anything religious based. This can be anything from a prayer after a game to a Bible study in the library after school. Because some might be worried Kennedy is encouraging those to pray and perhaps making some feel pressured to be involved, he has been asked to stop his nine-year tradition.

Kennedy has said he plans to comply so he does not lose his job. However, he feels praying on the field is something he has the right to do. Kennedy spent 20 years in the Marine Corps, and he feels it is his right to express his religion as long as he isn't trying to convince other players to join him. He pointed out that it's important to remember the whole purpose of this country is to have freedom of religion, but that's not the same as freedom from religion.

Support From Both Sides

The players and parents on both his team and the opposing team showed their support by joining him in a prayer. His most recent prayer went like this: "Lord, I just want to lift up all these warriors that came out here to compete today. I don't care what their beliefs are. We do believe in this sport. We believe in football, we believe in a team and competition. It's all about the game. In your name, Amen." It only lasted for 13 seconds. Not many people expressed concern that his prayers were interfering with the religious beliefs of others, and there isn't much information on what started the investigation.