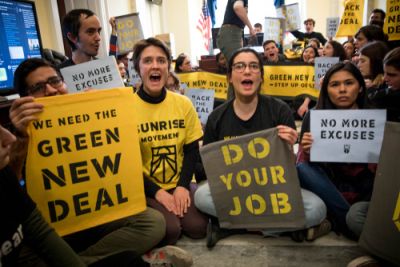 In the never-ending debate over climate change and what, if anything, America should do about it, the Green New Deal, a resolution sponsored by two Democrats, Rep. Alexandria Ocasio-Cortez of New York and Sen. Ed Markey of Massachusetts, has gained support from two major Christian groups. The Unitarian Universalist Association and the United Church of Christ both recently endorsed the measure. A third group, Young Evangelicals for Climate Action, praised the GND’s “biblical principles” and agreed to work “toward translating these...into viable, bipartisan bills.” A fourth group, Young Evangelicals for Social Action, failed to endorse the GND, fearing that such action would alienate the conservative co-religionists it seeks to influence.

The Unitarian Universalist Association is the main national organization for the 1,000-church-strong egalitarian spiritual movement. The United Church of Christ is a leading Protestant denomination with close to 825,000 followers and nearly 5,000 U.S. congregations. The Young Evangelicals for Climate Action is a highly conservative Protestant establishment. Green New Deal advocates see this Christian support as a major victory in their claimed nationwide growing support for climate change legislation. Many members of the three organizations phrase their support as a “what climate policy would Jesus choose?” approach; the answer, according to them, being “one that protects nature and lifts up the poor.”

Per its two co-sponsors, the GND consists of a comprehensive national proposal that will dispense with planet-warming emissions as well as create lucrative jobs in the renewable energy and infrastructure fields. Despite its grandiose purpose, however, the bill has garnered considerable criticism among both Democrats and Republicans. For one thing, as stated by Sen. Dianne Feinstein of California, “There’s no way to pay for it.”

Several months ago, the American Action Forum estimated the GND’s costs as follows:

Wall Street seems willing to invest significant resources in the various GND programs, but only if Congress commits to moving the bill forward. So far this has not happened. In fact, the Senate version of the bill succumbed to a resounding 0–57 defeat this past March, with most Senate Democrats mounting a protest and voting “present.”

It probably doesn’t help that the Green New Deal gets its name from President Franklin D. Roosevelt’s sweeping New Deal legislation in response to the Great Depression of the 1930s. That huge social engineering project resulted in a whole “alphabet soup” set of social and economic reforms and public works programs such as the AAA, CCC, CWA, FSA, NIA, PWA, REA, TVA, etc. Ultimately the New Deal wound up costing $41.7 billion in 1930s dollars, which translates to approximately $653 billion in today’s dollars. In addition, it increased the national debt by more than 50%, rising from $22 billion in 1933 to $35 billion in 1936. Obviously the costs of the GND, if passed, will far outweigh those of the original New Deal.

Many U.S. Christians, especially Protestants, see climate change as a biblical, moral, and gospel issue first and foremost instead of a political one. In the meantime, the Catholic Church’s Pope Francis put forth the encyclical Laudato si’ (“Be praised”) in 2015 that set forth religious reasons for fighting global warming. The Pope also has frequently sermonized against the lack of action on what he calls a “climate emergency.” He has even gone so far as to state that failing to moderate greenhouse emissions is “a brutal act of injustice toward the poor and future generations.” Nevertheless, the Vatican has yet to endorse the GND.

If passed, the GND would in theory demand that the United States begin to combat climate change. However, it faces many obstacles before its provisions become reality.

Imstuck on$600,000.00 perU.S. household. Iwo'nt make nearlythat much money off my Disability pension in a lifetime. So, who's going to pay my way? Face it people! We ca'nt change the world, and if one thing does'nt kill us something else will. Acceptance is the key. Accept life on its own terms, and try to give a nice day, in an altruistic way, until you croak. Otherwise, itmight help to listen to, and reflect on the words of the holy song by St. Ozzy Osbourne ( and his band of angels) called I do'nt want to chnge the world. I dont want the world to change me."

Wow, a doomsday accepter - rather than a life-wanter. I plan to go down fighting until the freaking walls burn down (or freeze up) around me. How anyone can just apathetically state "Face it, we can't change the world" is truly a sad individual. Why not just take the final step now, person? We can accept that we HAVE a life - we can accept that things look bleak, but that does not mean we can't get together collectively and tell the a-holes at the top that they need to get off their bums and do something. The power we - the people - had in the 60s and 70s helped make things happen, and I think it will happen again. The biggest question is "will it be enough?" or perhaps "Will it happen SOON enough"? PS, someone needs to learn how to construct appropriate contractions. PPS, not even Ozzy thinks he's a saint. But he sold a whole lot of music that you have apparently taken way too much to heart. Have a great day - and remember, some of us out here have no plans to give it up.