Gluttony and the Age-old Battle Against Excess 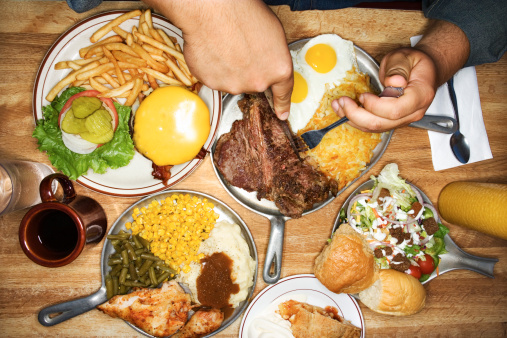 Many of us are relieved at the prospect of Lent ending on 19 April. It means the end of ritual fasting and the chance once again to indulge the senses. Although gluttony has traditionally been regarded as one of the Seven Cardinal Sins of the Roman Catholic Church, and a major sin by other denominations as well, it has been overshadowed by issues like abortion and homosexuality in conservative politics. Still, the "sin" of excess affects us now as always.

From the Medieval Church to Today's Dinner Table

Traditionally, gluttony has been defined as the over-consumption of food or the act of denying food to the needy, but the specific criteria have changed markedly over the millennia. In the Middle Ages, Pope Gregory I gave a list of ways gluttony can be committed, giving a Biblical example for each. These gluttonous acts consist of the following:

1) Eating before mealtime to satisfy the palate

3) Stimulating the palate with sauces and seasonings

4) Consuming more than the necessary quantity of food

5) Showing too much excitement over eating, even when eating an appropriate amount, and even when the food is plain and commonplace

At the list suggests, eating for pleasure, to satisfy the palate, and to savor luxury foods were also considered acts of gluttony, and not just over-consumption or snacking between meals.

Most of us will agree that overeating is something to avoid, but it still plagues many rich Western countries, while poor countries languish in poverty. The newly-released 2012 Gallup-Healthways Well-Being Index revealed that America remains an obese country, with 26.2 per cent of citizens considered obese. And nearly a third of American children 32 per cent were overweight, with the worst increases occurring among children who are already very obese, according to data from the National Health and Nutrition Examination Survey.

Fighting Obesity in the Present Day

Today, we call gluttony by various names excess, greed, overeating, consumption but it is the same problem described in the world's ancient religions. Few will dispute the claim that obesity has become a major health problem in the West, but many disagree on which steps to take in combating it. Poor diet and lack of exercise have been the chief focus of efforts to reduce obesity, but were medieval thinkers completely off-base with their critiques on indulging the senses in luxurious foods? It is fairly common, for example, to be advised by a doctor to reduce intake of salts, sugars, and/or fats.

Lent is a time not just for fasting, but also for reflection. If living a healthful lifestyle is a spiritual practice, perhaps it is time for ULC ministers to ask themselves how each of us can adjust our lifestyle habits to become healthier and happier.