Electronic Devices in the Sanctuary 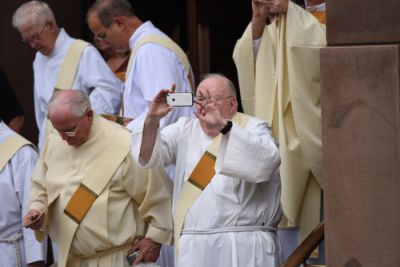 Presiding Bishop Michael Curry, the man who gave the address at the royal wedding in May, reportedly used an iPad to read from during the service. Not only did he give a mesmerizing sermon on love, but he brought the 21st century into the 14th century church sanctuary. One Twitter user posted, “HE IS READING HIS SERMON ON AN IPAD WE ARE IN THE FUTURE” (sic).

Contrast Curry’s approach to technology against Pope Francis. Last November, Francis said, “It makes me very sad when I celebrate here in the piazza or in the basilica and I see so many cell phones held up, not only by the faithful but also some priests and even bishops.” The gist of the message was that Francis believes cell phones should be put away in church.

Should the Church Embrace Technology?

Outside of the sanctuary, churches are taking advantage of technology through websites, apps, software and giving options. Technology has invaded the sanctuary for decades. How many people have benefitted from televised services? Many churches now have screens and projectors to present information during church.

There is an argument to be made for using a cell phone during the worship service. The Bible app is one of the most popular apps used during service. It’s been reported that usage of the app spikes on Sunday morning. Churchgoers have access to dozens of Bible translations, which can help someone understand something heard during service. It’s also possible to bookmark a scripture to come back to it later in the week.

Some churches are encouraging members to tweet or post snippets of the sermon or worship experience to give their friends a chance to peek in and see what’s happening in the church. Cell phone technology can be an evangelical tool or a way to keep in touch with homebound church members.

On the other hand, the argument can also be made to keep personal electronic devices out of church. People need places that are cell-phone free because we rely on these devices so much. The church should be a “sacred” place. It seems almost irreverent to bring the devices into the sanctuary.

Most people get easily distracted when they have their phone. Instead of living in the moment, people are using electronics to record the moment. It’s too easy to engage with a phone instead of the congregation. One notification of a text or email can take a person out of the service.

People have been distracted in church long before the cell phone was invented. If you grew up in church, maybe you remember jostling your grandpa or dad when the pastor finished the sermon. It’s hard to imagine today, but when the printing press brought the Bible to the masses, people were up in arms because the holy word of God was being translated into the vulgar language of English.

Churches may have to accept that technology is coming into the sanctuary. It’s not really a question of whether technology should be allowed in church or not. The better question is how can technology be used in a positive fashion for outreach and knowledge?

Streaming your church service for people who can’t physically be present extends the church’s reach into the community. Using a Bible app to gain understanding of a scripture can help someone focus on the sermon more effectively. Having access to the outline of the sermon through electronic media is another way to keep people focused.

Pastors and leaders in the church may have to help parishioners set guidelines for use of electronic devices during service. The technology is here. Let’s put it to good use, instead of banning it completely.