Cultural and Spiritual Centers in Phoenix 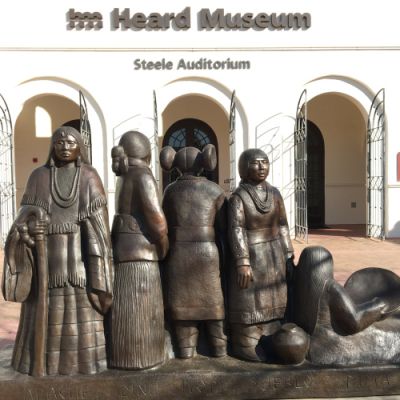 In 2017, Phoenix was ranked as the 5th most populous city in the United States. It’s also the only state capital with a population of more than a million, although Austin is very close at 950,000+. Most people consider Phoenix to be the cultural center of Arizona. It has dozens of wonderful museums that focus on the culture and history of the state. Their calendar routinely boasts fairs and festivals celebrating different heritages and historical events. It’s one of the best places in the US to learn more about the Navajo Nation. Check out these wonderful places in and around Phoenix where you can explore the spiritual heritage in the state.

The mission of the museum is to be "the world's preeminent museum for the presentation, interpretation and advancement of American Indian art, emphasizing its intersection with broader artistic and cultural themes.” One of its exhibits is a full Navajo hogan, which is where Navajos primarily lived. Another exhibit features 437 Hopi kachina dolls. It offers Native American artwork, jewelry and much more, as well as educational programs.

The Agua Fria National Monument is about 50 miles north of Phoenix. It was given its status in 2000 to enhance the preservation and protection of the site. Large pueblos have been recorded, some with more than 100 rooms. Many examples of petroglyphs have been discovered throughout the area.

Phoenix and one of its sister cities, Himeji, Japan, came together to create this tea garden and tea house. It’s a beautiful place of meditation and contemplation. It features stone footbridges, a Koi pond, a 12-foot waterfall and slowing streams. You’ll find two varieties of bamboo, plus other plants that can withstand the desert environment while offering the look and feel of a serene Japanese garden.

The official name of the church is The Church of the Immaculate Conception of the Blessed Virgin Mary, but it’s become known as St. Mary’s. It was founded in 1881, but the current building wasn’t constructed until 1914. It houses Phoenix’s largest stained-glass window collection. It also has four bells, which ring daily. In 1985, Pope John Paul II granted the church the rank of a minor basilica. Two years later, he would address crowds from the balcony of the church. The architecture is stunning, both inside and out.

Canaan in the Desert

The largest denominational group in Arizona is the Catholic Church. This spiritual retreat is just north of the Phoenix Mountain Preserve. The Evangelical Sisterhood of Mary maintains the prayer garden, which features the Stations of the Cross with sculptures depicting the final days of Christ. It was founded in 1968 by Mother Basilea Schlink, one of the co-founders of the Sisterhood. The prayer garden is open to the public. There is no admission fee, but the sisters could use your support. Generally, the garden is open from sunrise to sunset, but the exact hours are posted on its website.

This cultural center once housed the first permanent Jewish congregation in Phoenix. The cornerstone for the building was laid in 1921. It served as the synagogue until the building was sold in 1949 to the Southern Baptist Convention. From there, it served as Phoenix’s first Chinese-speaking Christian Church until 1981 when it was deeded to a Spanish-speaking church. The Arizona Jewish Historical Society bought the building back in 2001. It’s now a historic landmark that has undergone extensive renovation to make it a center for faith and community activities. It regularly hosts special exhibits that show Jewish culture. Once a month, the center offers a free documentary film screening. Check the calendar for all of the events sponsored by the center.