Celebrating During This Most Wonderful Time of the Year — Part II 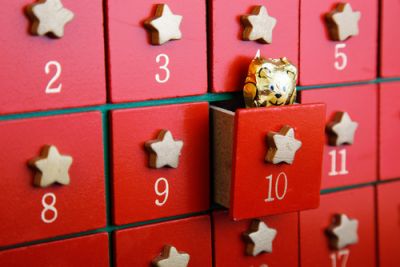 Continuing on with the holidays occurring during “the most wonderful time of the year,” we now get to the month of December.

The dictionary defines the word “advent” as “the arrival of a notable person, thing, or event.” Thus Advent (capital A) is the four-week period leading up to the arrival of Christmas, i.e., the birth of Christ for Christians. Advent always begins on a Sunday and must contain four Sundays, but its actual beginning date varies from year to year depending on what day of the week Christmas falls. Many families, both Christian and secular, make or buy an Advent calendar each year. Since kids are especially hyper at this time of the year, an Advent calendar allows them to “count down to Christmas” themselves. Most such calendars are quite large, with a door behind each day that kids, or adults for that matter, can open and find a little present such as a piece of candy, a sprig of holly or mistletoe, a friendship bracelet, a love letter, lipstick or lip balm, earrings, candy, perfume, nail polish, a kitchen magnet, small toy, etc.

December 6 is the feast day of Saint Nicholas of Myra (270-343 AD), the ancient Greek predecessor to Santa Claus in the US and Father Christmas in the UK. Saint Nicholas himself was known for his delight in giving gifts, but over the millennia, the gift-giving tradition has morphed into Christmas, December 25, rather than December 6. Nevertheless, in families that celebrate Saint Nicholas Day, the kids usually leave their shoes out in the hallway or near the front door before going to bed on Saint Nicholas Eve, hoping that they’ll find coins, candy, or other small gifts in them in the morning.

Bodhi Day celebrates Siddhartha Gautama, the historical Buddha, and the Bodhi tree under which he vowed to sit until he achieved spiritual enlightenment through meditation. Many Buddhists spend the day in quiet meditation of their own, while others visit shrines called stupas. Still others bake and serve holiday cookies cut to look like the Bodhi tree’s heart-shaped leaves or the tree itself.

The Immaculate Conception of Mary is a Holy Day of Obligation in the Catholic faith, meaning adherents must attend Mass. This feast day celebrates the Blessed Virgin Mary, Mother of God, and her immaculate conception, i.e., conception without sin, in the womb of her mother, Saint Anne.

The feast of Our Lady of Guadalupe celebrates the appearance of the Virgin Mary to a young peasant boy, Juan Diego, in the hills above present-day Mexico City in 1531. Per the legend, Mary asked Juan to build a shrine to her the first time she appeared to him. His bishop, however, didn’t believe the child’s story. Mary therefore appeared to Juan again on December 12 and instructed him to fill his cloak with flowers. Miraculously, even though it was the dead of winter when no flowers were in bloom, Juan found numerous blooming Castilian roses. He immediately took these to show his bishop. With the bishop looking on, Juan opened his cloak and the roses tumbled out, leaving an image of the Virgin on the inside of his cloak. This image has since been known as Our Lady of Guadalupe. Today, many Hispanics put up an altar in their homes in preparation for this feast day. On the day itself, they go to Mass with their children, often dressed as Juan Diego and Our Lady.

Be sure to follow along with more holidays in Part 3 of this series.