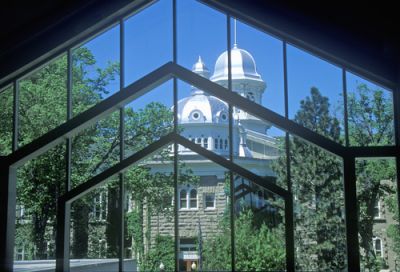 Ask anyone for the first city that comes to mind when Nevada is mentioned, and you’ll probably get the answers Las Vegas, Reno or Lake Tahoe. Ask someone what the capital of Nevada is, and you may get the same answers. The capital city of Nevada is Carson City, named after the mountain man Kit Carson. The Washoe people lived in the region before settlers came through the area on their way to California in the mid-1800s. When silver was discovered at Comstock Lode, Carson City began to grow.

In 1864, Nevada was granted statehood. Carson City was named the capital. As the city grew, the economy became less dependent on mining and more of a commercial center. It’s not generally considered a tourist trap, but it does have some wonderful cultural and religious centers.

This Carpenter Gothic style church was built in 1868. It’s the oldest Episcopal church still in use in the state. It cost only $5,500 to construct the original building, but the church was expanded over time. One of the stained-glass windows was a gift from England.  Today, the building is listed on the National Register of Historic Places.

This museum preserves and presents Nevada heritage. It houses the Spirit Cave mummy, North America’s oldest mummy. Take a tour of an underground mine. Make sure to explore the “Under One Sky” exhibit, which looks at Native American heritage through their own words. On the second Saturday of the month, the museum does a special program for kids. October’s theme is bats.

This museum opens in spring 2019, but it’s worth nothing while it undergoes renovations. Sadly, the history of the site involves making Native American children assimilate into American culture. It’s estimated that about 30,000 children attended the school before it was closed in 1980. It’s being renovated into a place of healing for Native families. Note the masonry and stonework of the building that was constructed by student apprentices.

This church has ties to Samuel Clemens, AKA Mark Twain. Clemens’ brother Orion was one of the founding members of this church, built in 1864. The original sanctuary is a historic landmark. The church has a new sanctuary that they currently use, but it includes many objects from the past, including a Bible dedicated to Clemens’ niece. The congregation has blended the past with the present in a beautiful way.

This is an interactive museum where children learn through experience and play. One of the main exhibits is a reproduction of an old school room, but one that everyone loves is the mining sluice where you can seek for treasure. It’s a wonderful place to experience history and heritage.

On the second and fourth Saturday of the month, the observatory hosts a free star party. The evening starts with a lecture, then you can enjoy a guided star tour with one of the astronomers. The lecture topics are varied, from space art to Isaac Newton to Star Trek. But it’s a good way to see what’s in the sky and think about the universe.

At visitcarsoncity.com, you’ll find a self-guided tour of the art galleries in Carson City featuring local artists and contemporary art. Many of the galleries switch their artwork around every four to eight weeks. You might experience Native American pottery or jewelry or catch a contemporary exhibit with photographs from around the state. John F. Kennedy said, “We must never forget that art is not a form of propaganda; it is a form of truth.”