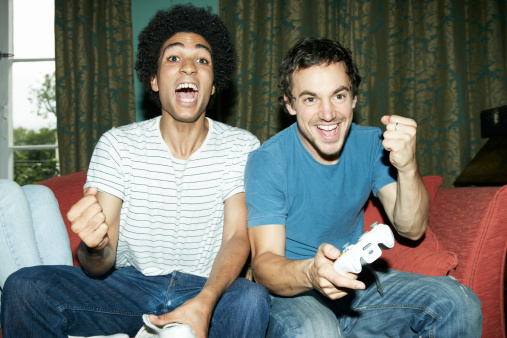 If you were a gamer in the early 1990's and raised in a Christian home, you might have heard of the Nintendo game called Bible Adventures. This platformer stood out with its baby blue cartridge and for gameplay that was composed of three separate stories from the Old Testament: Noah's Ark, Baby Moses, and David and Goliath. It was designed to give kids an opportunity to play and learn about the Bible but there is one problem: it is about as close to its source material as Disney movies are to their fairytale counterparts.

In Noah's Ark, the object of the game is to actively capture two of every animal and round up the necessary supplies for the upcoming flood. In the actual story, God orchestrates the migration of the chosen animals across the globe to the construction site. This is a big distinction since in the game, it almost seems as though Noah is single-handedly saving life from being whipped out by a vengeful deity. The metaphor of Noah as God's vessel is lost and the reason for the creation of the ark itself is omitted altogether. There is also an odd mechanic where Noah can pick up and carry several full-grown animals and run full speed back to the ark. The Biblical story is already quite fantastic on its own and this super strength may cause kids to question the whole thing.

In Baby Moses, you play as the birth mother of the prophet, carrying your young baby to the Pharaoh in Egypt. The onslaught of attacking creatures makes it seem as though God has possessed them in attempts to stop you for completing your mission as opposed to the real story where God guides the abandoned baby to his new home. Not only is the gameplay incredibly annoying and tedious, but there is not sense of divine destiny.

David and Goliath does the best job at capturing the important parts from the Bible. As a shepherd, you must tend your flock, saving them from potential dangers. As you progress, you must fend of attacking Philistines and their leader, Goliath. In both the game and the story, David serves as a metaphor for God caring for his people. The fight against the giant Goliath reminds us that with God, we can accomplish even the most daunting task.

This game really doesn't accurately capture the stories of the Old Testament or even the themes behind them. It occasionally glitches and can be a bit frustrating to play. Despite this, we have some fond memories of time spent playing it. Just for the nostalgia factor, it is worth embarking on these quests.