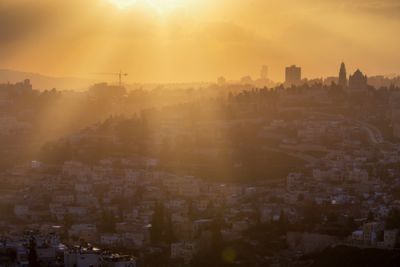 In the Book of Numbers in the Old Testament, Moses sends out 12 spies to the land of Canaan. Scripture gives us the name of the men who went, the most notable of whom was Joshua, the man who would lead Israel after the death of Moses. They were sent to scout out the land, much like a reconnaissance mission. The spies spent 40 days in Canaan. Upon their return, the Bible says,

The spies reported that the land was flowing with “milk and honey,” but the cities were strong, and the people were large. Only Joshua and one other spy believed that the Israelites could occupy the land. The Israelite community believed the 10 spies who made the bad report. Those 10 spies were struck down with a plague and died. The Israelites were made to wander the desert for 40 years because of their lack of faith. Joshua and Caleb were the only men from their generation who were allowed to enter the Promised Land.

The Land Promised to Abraham

The concept of the Promised Land is central to Zionism. Canaan is the land that God promised to give to Abraham and his descendants. The promise was confirmed to Abraham’s son, Isaac, and to Jacob, Isaac’s son and Abraham’s grandson. The story of the 12 spies is one that resonates in Jewish history. Although little is known about the 40 years spent wandering in the wilderness, the Jews have not forgotten it.

This is why the finding of an ancient mosaic in a synagogue from the fifth century AD is so important. Archaeologists have been excavating Huquq, an ancient Jewish village in Galilee. Since 2012, the team of archaeologists from Tel Aviv University, Israel Antiquities Authority and University of North Carolina at Chapel Hill have discovered mosaics depicting Noah’s Ark, the Tower of Babel, Samson and more. To date, they’ve discovered about a dozen mosaics that decorate the floor of the synagogue. Just recently, they found a mosaic depicting the scene of the spies carrying the branch with a cluster of grapes.

The collection of panels is considered to be one of the “richest, most diverse collections of mosaics.” The mosaics are estimated to be about 1,600 years old. Historically, the time frame would be when Rome ruled the region. The synagogue belies the idea that Judaism was on the decline.

One of the professors involved in the discovery has stated that the mosaics discovered could change how people think about early Jewish art. Professor Jodi Magness says, “Ancient Jewish art is often thought to be aniconic, or lacking images. But these mosaics, colorful and filled with figured scenes, attest to a rich visual culture as well as to the dynamism and diversity of Judaism in the Late Roman and Byzantine periods.”

The project’s website, www.huqoq.org, has a great deal of information about what has been discovered at the site.

These finds may not prove that the stories from the Bible are true, but the mosaics do depict the traditional heritage of the Jews. The panels provide a lot of information about daily life in ancient times. The mosaic that shows the men building the Babel Tower helps historians understand ancient construction techniques. This archaeological find adds to the knowledge of ancient Israel customs and culture. It will be interesting to watch this project and see what else is uncovered.