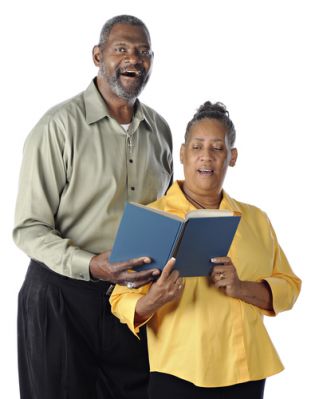 “During June, we pay tribute to the contributions African Americans have made and continue to make to American music. The indelible legacy of these musicians who have witnessed our Nation’s greatest achievements, as well as its greatest injustices give all Americans a richer, deeper understanding of American culture. Their creativity has shaped every genre of music, including rock and roll, rhythm and blues, jazz, gospel, hip hop, and rap.”

African-American Music Appreciation Month began in 1979, when President Jimmy Carter initiated Black Music Month. Over the past few decades, many great African-American performers have been celebrated, such as Chuck Berry, Ella Fitzgerald, Duke Ellington, Whitney Houston and Ray Charles. This June, let’s remember some of the African-American gospel hymns that have been sung in churches for generations.

There Is a Balm in Gilead

The phrase “balm in Gilead” most likely comes from Jeremiah 8. It refers to the spiritual medicine that heals Israel and God’s people. The song is sung in many churches. The lyrics read:

There is a balm in Gilead

To make the wounded whole;

There is a balm in Gilead

To heal the sin-sick soul.

Let Us Break Bread Together on Our Knees

Let us break bread together on our knees.

Let us break bread together on our knees.

When I fall on my knees with my face to the rising sun,

O Lord, have mercy on me.

This song is one of the most popular hymns sung during Holy Communion in the United Methodist Church. It has a simple structure that is easy to remember and harmonize while people approach the altar. It’s thought that the hymn has its roots in South Carolina. Early published versions had a strong slave dialect from that region.

My Tribute — To God Be the Glory

How can I say thanks

for the things you have done for me

Yet you give to prove your love for me

The voices of a million angels

Could not express my gratitude

All that I am and ever hope to be

I owe it all to Thee

Andrae Crouch considers this song to be one of his most well-known songs, but his influence goes much deeper than most realize. He is one of the figures of the 1960s and 1970s who helped bring contemporary music into the Christian church. Over the course of his career, he won seven Grammys and six GMA Dove Awards.

Were you there when they crucified my Lord?

Were you there when they crucified my Lord?

This African spiritual was the first to be included in a major American hymnal when it appeared in the 1940 Episcopal Church hymnal. The song was probably composed by slaves in the 19th century. It first appeared in print in 1899.

Go, Tell It on the Mountain

Down in a lowly manger; Our humble Christ was born

And God send us salvation, That blessed Christmas morn:

Go tell it on the mountain, over the hills and everywhere;

go tell it on the mountain, that Jesus Christ is born.

This African-American spiritual is often considered a Christmas carol, but Peter, Paul and Mary adapted the tune in 1963 as a civil rights melody. Countless artists, both gospel and secular, have recorded the song for Christmas-themed albums. It’s thought to date to 1865 and attributed to African-Americans, but its origin is largely unknown. John Wesley Work Jr., a collector of Negro spirituals, included the song in his second volume of “Songs of the American Negro.” Historians credit Work with the popularity of the song.