A New Resurgence of an Old Tradition

Over the course of the last few decades vintage and retro styles have become all the rage. Pleated jeans, big sunglasses andÃ¢ religion? It is true that recently Paganism and Wicca, old religions, have been gathering increasingly large gatherings and many communities have a fairly large population of "witches", or those practicing these ancient rites and rituals. One of the most prevalent traditions of this ancient religion is the hand-fasting ceremony. 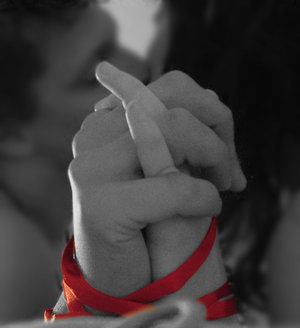 Originally, the hand-fasting ceremony marked the beginning of a betrothal period that lasted a year and a day. At the end of this period the couple could decide to continue with the union unto marriage or they could chose to dissolve it. Today it is a marriage ceremony that is generally Pagan but hand-fasting rituals can be seen in many religions. A binding of the hands is a way to represent the physical bond between bride and groom. Though there are some commonalities between hand-fasting ceremonies, there is not set way to conduct them. Generally the ceremony begins with a greeting, elemental blessings and then drawing down of the God and Goddess. From there it is common practice to bless the rings that are to be exchanged and then exchange them. At this point you would then typically bind the hands of the bride and groom. There is not specific way that the hands are to be bound; some couples chose to do right to left as they are side by side while others perform the ceremony facing each other and may bind either right or left hands together. The hands will be bound together by a hand-fasting cord that can be made of leather, ribbon or anything other material of the couple's choosing. Often couples will pick cords that are multiple colors where each color has its own meaning or significance.

There are many additional rites that are involved with the ceremony such as bringing the sword, representing the man, and a chalice which represents the woman together. Many people also chose to do a communion of sorts that features cakes and ale. Many couples who have a hand-fasting ceremony purchase a chalice specifically for this day.

Hand-fasting ceremonies are becoming increasingly popular and this can be partially attributed to the fact that couples are allowed lots of freedom while planning the ceremony.Ã‚ Furthermore, while lacking in continuity; hand-fasting ceremonies are deeply rooted in ancient traditions that still resonate with people today. Though the form is different, the legal restrictions are the same as traditional, Christian ceremonies. It needs to be performed by an ordained and sponsored clergy. The ULC Ministries offers online ordinations where people can become a minister online and then perform a hand-fasting ceremony for a couple wishing to have one./